A QUEST FOR TRUTH AND JUSTICE

A QUEST FOR TRUTH AND JUSTICE 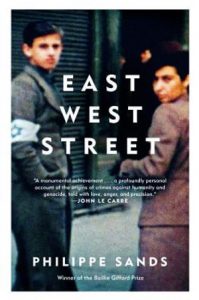 This is a monumental work that reads like a detective novel and impacts emotionally and intellectually with tsunami like effect. Readers who finish the book cannot fail to be moved hugely by Sands’ treatment of the human tragedy that we recall as World War II and the Holocaust. And yet, this is not a book of statistics or endless horror.

The horrors recounted by Sands are sharp and contained – yet, enough to shock even after decades of stories, movies and recollections from the Holocaust. Alongside that is the remarkable tale of two men who were rivals on the same trail – a journey to bring the perpetrators of genocide and/or crimes against humanity to justice.

East West Street begins simply enough, with the author explaining how he came to take up his project. A human rights lawyer, Sands had ignored his family connections with a town in Poland (today Ukraine and in the past Galicia) named Lviv – also at times called Lemberg, Lvov and Lwow as the armies of eastern Europe redrew national boundaries, no fewer than eight times between 1914 and 1945.

Sands had gone to Lviv to give a lecture in 2010. He had become fascinated with the achievements of two men with connections to Lviv – academic lawyers Hersch Lauterpacht and Rafael Lemkin. These two men had been responsible for the establishment in the global lexicon at the Nuremberg trials of the terms “crimes against humanity” and “genocide”. Sands’ work on these men had brought him to Lviv to lecture and discuss the tussle between Lauterpacht and Lemkin about which term should be used to bring justice to the victims of Nazi Germany.

The story of Lemkin and Lauterpacht is the spine of East West Street but, as Sands left the lecture in Lviv in 2010, a student who approached him would set him on a wider mission. “I understand your interest in Lauterpacht and Lemkin,” she told him, “but isn’t your grandfather the one you should be chasing?”

The student emphasised that the lecture was important “personally” to her and immediately Sands realised that the student’s identity – as he puts it “whether Pole or Jew” – was “not a matter to be spoken of openly. Issues of identity and group membership were delicate in Lviv”. Sands’ search from that moment was destined to become the personal alongside the universal.

Unrecorded history, along with cover-up, in spite of post war trials and condemnation, had left an unspoken legacy. It thus became Sands’ quest to dig out the forgotten, the hidden, the legacy unacknowledged of the many crimes against humanity and genocide not fully recognised in the record beyond the immediate years of World War II. And this as it had affected his family, those connected to his family and the millions of others caught in the horror of that war.

There is a vast list of characters in East West Street. Strangely, it is only with the words of the student in Lviv at his lecture that Sands recognises how his academic endeavours and his personal history are entwined. And so begins the unravelling of past secrets – some forgotten, others not recorded and some needing forensic digging.

The unravelling begins with his maternal grandfather Leon, born in Lemberg (Lviv) in 1904, and his wife Rita. Their daughter Ruth, Sands’ mother, was born in Vienna in 1938 and the family survived the war having relocated to Paris and survived its occupation by the Nazis. Their families that remained in Austria and Poland did not survive.

As Sands records of Leon’s mother Malke, who was transported east to Treblinka from Vienna along with Rita’s mother Rosa in July 1942, the Holocaust ordeal has tragically become a familiar story for students of twentieth century history. Sands, however, brings it into startling relief describing his elderly great grandmothers, each with a small suitcase, one to die on the way and those who did not, nearly 2000 of them, spending twenty-four hours packed into cattle wagons, among them three of Sigmund Freud’s sisters. In a camp just outside Treblinka, they alighted to be stripped and their hair shaved to be used in the manufacture of mattresses. Sands writes: “Malke’s life was over within fifteen minutes of stepping off the train.”

East West Street – its title derived from a major thoroughfare in Lviv – is a work of enormous research over years and involving travel not just in Eastern Europe but across the globe. From old photographs and documents discovered in his mother’s collection of his grandfather’s papers as well as archival work of a wider nature, Sands searches for the answers to questions of identity, relationships and people’s fates. He meets the children of his major characters – the sons of Nazi leaders and the daughters of their victims. He tracks down a mystery surrounding his mother’s escape as an infant from Vienna and his grandmother’s friendship with another man that delayed her own exit from Vienna. Momentarily, Sands questions his own identity.

Yet the mission is a multilayered one and reaches far beyond personal queries and discovery. Human rights lawyers Hersch Lauterpacht and Rafael Lemkin are the impetus for this endeavour and their stories take the personal onto the global stage along with scenes that are immortalised in human history – both dark and light.

Lauterpacht, born in 1897, grew up in Lviv and studied law at its university. Lemkin, born 1900, grew up in what today is Belarus but studied law in Lviv over five years beginning two years after Lauterpacht had left.

Remarkably these two men would change the course of history at the Nuremberg trials. In their early lives, both Lauterpacht and Lemkin lived through years of pogroms against Jews in central Europe. They were familiar with the arguments at Versailles to reject the protection of Jewish minorities by countries not wanting to have their sovereignty interfered with – among them, the United Kingdom. However, Poland had been forced to sign what was known as the Little Treaty of Versailles which gave Polish nationality to the inhabitants of Lviv with the condition that Poland would protect all its inhabitants “without distinction of birth, nationality, language, race or religion”.

With the serendipity of history, both Lauterpacht and Lemkin escaped the slaughter they would have met as prominent Jews in Eastern Europe in the years of the Nazis. Lauterpacht made a career for himself in Britain and Lemkin found his way to the United States. In the United States in the 1930s, Lemkin became a public prosecutor while working on legal manuscripts that developed ideas for the prosecution of crimes against groups. In time he would invent the term “genocide”. From an early age, Lemkin had argued the importance of the Turkish mass murder of the Armenians: “More than1.2 million Armenians” had been killed he wrote, “for no other reason than they were Christians.”

In Vienna and later in Britain, Lauterpacht worked on the law relating to human rights, an embryonic notion at the time. Absorbed in his work, by 1937 he had been elected Chair of International Law at Cambridge University. On a lecture tour of the United States, in 1940, he was introduced to Robert Jackson who was President Roosevelt’s attorney general. He did work for Jackson while there and in time the connection would be of importance at the Nuremberg trials where Jackson was the United States’ chief prosecutor.

For five years he was king of occupied Poland, with a wife and mistress, five children, thirty-eight volumes of detailed diaries, and a collection of paintings that included a famous portrait of Leonardo da Vinci.

It is through his portrayal of Frank that Sands exposes Nazism and its naked views of power and generic elitism along with its brutal dehumanising of minority groups especially the Jews. Frank’s diaries and writings attest to his intellectual adherence to the belief in a right to exterminate by vulgar means those races deemed as vermin. As the Italian writer Curzio Malaparte would record after time spent with Frank in Poland, on a visit to the Jewish ghetto in Warsaw – made as an outing to entertain his guests – Frank openly displayed his righteous contempt for the Jews forced to live in the crowded, unhygienic space allotted them. As a child peeped from a hole at the base of a wall, soldiers fired at it saying they were targeting a rat. They missed so Frank took the gun and fired at the “rat” himself.  Frank’s diaries, recording his genocidal beliefs, would be used in his trial at Nuremberg.

The climax of East West Street is Sands’ account of the Nuremberg trials, especially relating to Frank but also to the part played by Lauterpacht and Lemkin. There is a tussle between the men – at times quite personal. But each played their part in the adoption of the ability of an international court to take to trial the crimes of war that are beyond hostility between nations. This was a radical step in 1946.

Sands’ recreation of the tussle is a page turner as he relates the role played by Lemkin and Lauterpacht in the Nuremberg trials – no mean feat when the detail of the proceedings is taken into account. Lemkin had been kept at arms-length in the US for much of the trials due to his unpredictable nature and ability to overplay his hand. UK prosecutor Hartley Shawcross, in his final address which lasted over two days, finally brings this marathon to its breakthrough. Lauterpacht had written a draft of the speech for Shawcross, but Shawcross did his own work after that.

Sands works through the Hartley Shawcross speech describing Shawcross as offering a “single, brilliant, defining moment of courtroom advocacy” in his description of the murder of a family of three generations taken from a witness statement of a German manager of a factory in Frank’s territory. “Shawcross adopted a timbre that squeezed all emotion out of the words, speaking slowly and articulating each word with crystalline precision,” writes Sands. Writer Rebecca West described the effect as “a moment of ‘living pity’” in the courtroom. Yet there is more to come and after a lengthy analysis of the Nazi atrocities and their systematic techniques in dehumanising and extermination – ones that Lemkin had defined long before – Shawcross called for the strictest penalty on the grounds of genocide.

While Lemkin had not managed to have such acts outside of the war included in the definition of genocide that Shawcross argued, the word had made the stage and was not going away. Lauterpacht, meanwhile, would be also acknowledged as Shawcross went on to argue that those who helped a state commit a crime against humanity would not be immune from responsibility; they could not shelter behind the state. “The individual must transcend the state,” said Shawcross. Here Lauterpacht prevailed in the use of the term crimes against humanity.

East West Street is a remarkable work. One that takes particular slices of a vast human morass and historical trauma and manages to create an experience of the whole. It deserves the wide acclaim it has received.