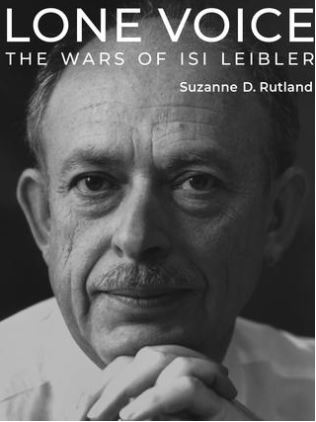 Lone Voice – The Wars of Isi Leibler by Suzanne Rutland

On 16 March 2021, Lone Voice – The Wars of Isi Leibler by Suzanne Rutland, was launched in a moving and memorable on-line ceremony from Bar Ilan University in Israel, in which Isi and Naomi Leibler were active participants. We were shocked when, less than one month later, Isi Leibler passed away.

Leibler’s lifetime of Jewish leadership was truly extraordinary in its vision, intensity and impact, both in Australia and overseas. He was an educated, passionate and articulate advocate of the highest order. He was determined, incisive and uncannily perceptive.  And, in certain key respects, he changed forever how Jewish leadership thought and acted as a community both here and internationally.

Leibler, like many of his generation was shaped by the impact of the Holocaust.  Leibler had a deep understanding of Jewish history and a real sense of his own destiny and the impact that he could and did achieve.

From early in his career, he either created or was referred to in important contemporaneous letters, diaries, memos and other records all of which became part of Leibler’s fabled archive to which Rutland as his biographer had unlimited access. That enabled her to add astonishing detail to the narrative of his life’s work and achievements, in her important and comprehensive biography.

I had the great good fortune of working closely with Leibler for more than 50 years in Australia and overseas. I was in some of the Leibler’s “wars” mostly on his side, sometimes on the other side and sometimes – as Rutland has recorded – in the middle as an intermediary brokering peace.

No one could ever doubt what Leibler was thinking. Whether in conversation, or in his pamphlets and later syndicated newspaper column Candidly Speaking from Jerusalem, Isi was always forthright, well researched and informed by history and experience. At times he could be brash, combative, confronting, obsessive and impatient. At other times he was caring, loyal, engaging, hospitable and great company.

Whilst Leibler was lots of things, he was neither a team player nor a consensus leader. Usually, it was his way and no other. He could be tough, obstinate and unforgiving. During the period of his ascendancy in the 1960s through to the 1980s, he left a number of wounded in the Australian and international Jewish leadership, most of whom in time he made peace with. In later years, his campaign against Julius Berman, the longstanding chairman of the organisation responsible for material claims against Germany for survivors of the Holocaust, was particularly harsh and is dealt with by Rutland from Leibler’s perspective only.

Leibler’s greatest accomplishment, amongst so many, and his abiding legacy, was the manner in which he recognised the critical connection between the rebirth of the state of Israel and the need to free the millions of Jews in the Soviet Union who wished to leave that country. In the campaign for Soviet Jewry, Leibler captured the imagination of and galvanised Jewish communities and, importantly, a significant number of others in positions of influence, in response to the miraculous rebirth after decades of oppression of the Jewish identity of Jews in the Soviet Union.

In particular, his contribution was unique and ground breaking in: persuading key members of the Australian Communist Party in Australia to assist in advocating for Soviet Jewry; having the plight of Soviet Jewry raised in the Australian Parliament and then at the United Nations for the first time by the Australian delegation; and  changing the approach of the World Jewish Congress and world Jewry to that issue, from shtadlonus (private diplomacy), which was the strong preference of its legendary president Dr Nachum Goldmann, to an open and very public campaign, thereby creating a new and what became an extremely successful, model for Jewish advocacy. Whilst Leibler recognised that shtadlonus had a place in Jewish diplomacy and advocacy and he practised it with great distinction in the corridors of power throughout the world, he nevertheless insisted that it had to be deployed with great discretion.

For most in the Jewish community, especially its younger members, the campaign for Soviet Jewry was their first experience of public Jewish activism. Jews and non-Jews alike signed up for the campaign: they protested; lobbied; wrote letters; organised petitions; marched on the streets; held vigils; and generally did everything possible, often with great imagination and effect, to highlight the plight of Soviet Jewry and to exert influence on those able to exercise power.

The Soviet Jewry campaign provided the model, for young Jews in particular, to promote other Jewish causes, notably Israel, which was the fulcrum of Leibler’s Jewish activism. It produced a new generation of Jewish leaders and Jews committed to the rigorous public advocacy of Jewish causes and other issues of human rights, greatly encouraged by the then leadership of the community; and it cemented the approach to be adopted, and since adhered to, that when it comes to Jewish rights including the State of Israel and anti-semitism, Jewish communities  had to speak up publicly, albeit in calibrated and reasonable terms, and had to enlist the support of like-minded individuals across the political, media, civil society and general communal, landscapes.

That was then. But times have changed markedly from the days of “Let My People Go”, and that general community support is waning.

In one of his last “Candidly Speaking from Jerusalem” columns, published in August 2020, Leibler warned:

Civilisation is currently facing the greatest threats since the rise of Nazism. Coronavirus and its social and economic by products have resulted in global waves of populism, accompanied by violent demonstrations initiated from elements of the extreme left and right. These elements, in particular the Black Lives Matter (BLM) movement in America, are exploiting racial issues to host radical anti-Semitic groups and oppose Israel in their platform.

After decrying the attitude of the dominant liberal media and expressing astonishment that the vast majority of Jews regard it as incumbent on them to be seen as supporting the BLM movement despite its anti-Semitic components, Isi Leibler made a critically important observation when he said:

Many young people today are no longer able to visualise the powerlessness of Jews before the Jewish state was created. They have come to believe that it is inconsistent to be liberal and support what they view as a “reactionary” nationalistic Jewish state. Sadly, Jews in the United States and other parts of the Diaspora do not consider support of Israel to be a priority in their political agenda and rather seek to blend into the progressive camp even if that entails abandoning or turning against Israel. This explains the deafening silence of major Jewish organisations in the face of anti-Semites in the BLM and other “progressive” movements.

Perhaps it is just as well then, that Leibler was not spared to witness the dramatic and truly frightening upsurge in “progressive energy” during the 2021 Gaza campaign in the US Congress, on the streets of so many cities throughout the world, in the media and especially on social media.

The Jewish world both in the diaspora and Israel has huge challenges to face, but they will have to be faced without Leibler whose fierce advocacy, truth-to-power influence, sense of history and Jewish destiny and wise counsel will be sorely missed.