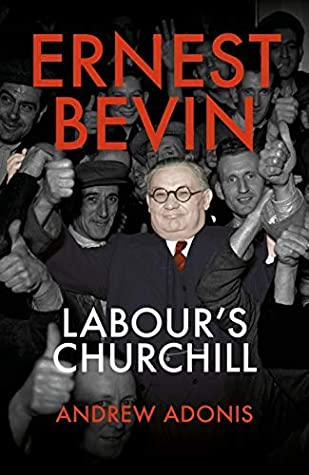 In the reconstruction of Western Europe after World War II, one of the most significant figures was the UK Foreign Secretary, Labour’s Ernest Bevin. Without his efforts at the many negotiating tables that sprang up in centres from Potsdam to Moscow, Josef Stalin would have won control of the whole of Germany as part of its Soviet dominated eastern European bloc.

That Stalin lost out in such negotiations was largely due to Ernest Bevin’s mastery of striking deals and his intense opposition to communism from the 1920s as a union organiser.

In Ernest Bevin – Labour’s Churchill, a new and comprehensive history of this remarkable, political human force, Andrew Adonis captures adroitly a contradictory hero or, as Churchill once labelled him, a “working class John Bull”. As Adonis puts it:

There was a touch of genius about Ernie, and not just in his own estimation. However, circumstances played a key role. For both Churchill and Bevin, transfiguration followed heroic victory in the Second World War.

Born in depression Somerset in 1889 to an impoverished single mother and the youngest of seven, Bevin never knew his father. His mother died when he was eight. Basic schooling, evening classes at the Bristol Adult Education School movement and the Workers Educational Association and three years as a Baptist preacher instilled in Bevin a self-confidence at the podium alongside a tribal understanding of politics and the Labour struggle.

Helped to find work in the cartage industries by his older brothers, Bevin emerged as a trade union organiser at the age of 29. After six years as the assistant national organiser of the dockers union, Bevin became a celebrity following his ”brilliant” presentation in the Royal Courts of Justice for the dockers’ case for a pay rise in 1920.

From this Bevin was able to bring about the amalgamation of the dockers and thirteen other unions to form the Transport and General Workers Union in 1922 (later to be known as the T & G). At its formation, the T & G was the third largest union in the UK; at the time of Bevin’s death in April 1951, the T & G was the largest trade union in the free world. Writes Adonis: “What makes Bevin’s rise so extraordinary is that he created both the post and the institution that made him a national leader.”

Andrew Adonis has, not before time, dragged Ernie Bevin back into the historical sunlight where he deserves to be. Overshadowed by larger historical figures on the world stage such as FD Roosevelt, Winston Churchill and Clement Attlee, Bevin had slipped into the shade in spite of his larger-than-life personal presence in the UK and Europe during his lifetime.

Ernest Bevin’s attraction was what Adonis describes as harbouring a combination of “remote and intimate”, adding that he “made friends more readily with crowds than with individuals”. For all that, his friendship with Clement Attlee, forged in the pre-war years as Labour struggled to resurrect itself after Ramsay MacDonald’s Laborites joined the Conservatives in a National government in 1931, was genuine.

Adonis unravels Bevin’s strategic antennae through the years of the 1920s and 1930s when Labour was in the wilderness but the union movement was a growing voice to be reckoned with. His opposition to both left and right totalitarianism – the rising fascists and the communists, especially in the trade unions – was instinctive. Bevin saw the communist movement, with its orders from Moscow, as Labour’s real foe. Basically, he wanted both the extremes of left and right to lose.

Bevin was what Adonis describes as “revolutionary about goals, [but] democratic about means”. Argument, debate and potential victory was the only way. He knew when not to intervene. The London Bus strike of 1937 is a good example. He could not stop the strike so he left the communist-dominated strike committee to overreach and implode leaving him to seize control.

During the 1926 General Strike, a sad failure for the unions, Bevin made his mark as an industrial negotiator. While the unions were beaten, Bevin came to the prime minister’s notice described by his Labour secretary as “the ablest leader in the trade union movement, with a combination of practical ability and imagination greater than that of any other”. He was seen as the way forward for industrial struggles where arbitration and conciliation could prove more effective than strike action. Bevin emerged triumphant, eventually having secured deals that would in time ensure that of the 353,000 T & G members who had been on strike fewer that 1500 failed to get their jobs back.

And, Bevin kept his opponents close. A life on the road with the union meant Bevin was personally known to hundreds of branch chairmen and thousands of unionists. His searing cry was that he wanted not more unions but a host more trade unionists. His huge frame and speeches full of muddled metaphors alongside bullseye pragmatism and frank and honest messaging made him king of the unions.

Throughout his life Bevin played to the working class ear. Meanwhile, in private, he increasingly enjoyed the spoils of management and aspiration. In 1941, he joined the Garrick Club and for decades lived in comfort in central London. On the podium and in front of the workers, he was just Ernie speaking in classic “Bevinese” of which the best is, “If you open that Pandora’s Box you never know what Trojan ‘orses will jump out.” Cutting down an eloquent speech by Labour leftist Nye Bevan, he opined, “It sounded as if he’d swallowed a dictionary. ‘E used a lot of words but ‘e didn’t know what they all meant.” Bevin’s friend from the 1940s, Francis Williams summed up his speech making:

The very clumsiness of his sentences, his contempt for syntax and the niceties of pronunciation, the harshness of his voice and powerful emphasis of his gestures seemed when he was speaking to a mass audience to make him the embodiment of all natural and unlettered men drawing upon wells of experience unknown to the more literate.

In his chapter “Ernie”, Adonis quotes extensively from Nicholas Henderson’s Inside the Private Office: Memoirs of the Secretary to British Foreign Ministers. These rare insights into working and travelling with Ernest Bevin capture him at his personal best – a true force of nature.

Like all showmen, Bevin was big on talking – mostly about himself. He kept company into the small hours over drinks regaling tales of his political crusades. No one listening could escape. He was also, like many who get to the top, a man who could successfully magpie other people’s ideas. Bevin had travelled widely with the union movement. During the Munich crisis, in 1938, Ernie Bevin was all but alone among British leaders in opining that Czechslovakia was not some small, far away country whose freedom could be traded away. He had been to Prague and knew better.

In the years leading to the Depression, Bevin was a Keynsian before Keynes espoused his theories for governments to spend as a way out of economic downturn. Adonis’ analysis of Bevin and the Keynsian approach, however, gives far too much credit to Keynes’ theories in the Depression. The UK National and Conservative governments – and indeed the Lyons Australian government – engineered far greater growth in the 1930s by enforcing economic prudence than the double dip depression of Franklin D Roosevelt’s Keynsian New Deal.

In mid-1940, as Churchill formed his National cabinet with Labour’s Attlee as Deputy Prime Minister, Bevin was handed the post of Home Secretary followed by a seat in the House of Commons. His efforts during the war were – with Attlee – the vital support the embattled Churchill government needed to survive. Bringing the unions onside as part of an energised state was Bevin’s master strategy. Wages increased and days lost to strikes diminished. Writes Adonis:

The psychology of crowds had been a Bevin study since his earliest days as a lay preacher and a union organiser. He knew that collective action by consent was ten times more effective than direction from above, and he was a master at mobilising working men en masse.

If the position of Home Secretary during the war years put Bevin at the apex of the Churchill years at Number 10, it was as Foreign Secretary after Labour’s win in the general election of 1945 that gave Ernest Bevin the best chance to help shape the post war world. Faced with the gathering of world leaders at the Potsdam Conference, held from 17 July to the 2 August 1945, Bevin absorbed the fact that US president Truman and former British Prime Minister Churchill were no bulwark against the menace of Stalin and Molotov.

FDR had regarded Stalin as a “comrade” and Truman began as a complete innocent, opining of his first impressions of Stalin much later that “he had liked the little son-of-a-bitch”. Truman’s Secretary of State Jimmy Byrnes had all the superficial smoothness of a Manhattan sales rep and told Bevin he knew how to deal with the Russians – “it’s just like the US Senate … You build a post office in their state, and they’ll build a post office in our state.” Adonis adds, “Bevin was as ‘prima-donnish’ as Byrnes, but he had no illusions about happily building post offices with Stalin.

The negotiations over the conferences at Potsdam and Moscow and all that flowed in between and on to the Berlin airlift/blockade of 1948-49 are deftly described in Adonis’ account, keeping pace but not crushing the personalities and action with detail. Bevin held the line – his queries and resistance in confrontations with Stalin and Molotov were shrewd and bereft of appeasement. Bringing onside the French and maintaining the lines of defence for the division of West Berlin/West Germany from the Soviets was no mean achievement.

That the relief of West Berlin in the Soviet blockade in 1948 ever happened was due to the force behind the Bevin-led opposition to Stalin’s claim to all Germany. Thus, that the West took on Stalin in the late 1940s and won was – ironically – only made possible by the forceful negotiating tactics, not of the capitalist engine of the US but of a British socialist. Union leader Ernest Bevin.

Bevin was a man of his time and beyond it. Always an imperialist, in the best UK working class traditions, he regretted India’s independence. He opposed the creation of the State of Israel as he believed it would contribute to the diminishing of British influence in the Middle East. He had no interest in women’s rights and thought teachers were “spoiled” and privileged.

For all that, Ernest Bevin was a person of extraordinary talents, leaving his mark on the twentieth century. Clement Attlee summed him up simply:

Ernest looked, and indeed was, the embodiment of common sense. Yet I have never met a man in politics with as much imagination as he had, with the exception of Winston.

It is Andrew Adonis’ achievement to have given twentieth-first century historians this absorbing and colourful portrait of Ernest Bevin – a twentieth century goliath.