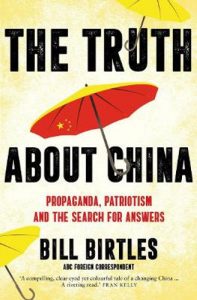 The Truth About China: Propaganda, Patriotism and the Search for Answers by Bill Birtles

It is a standard observation, not always honoured in reality, that journalists are not supposed to be the subject of their own reporting. Yet Bill Birtles has every reason to break with this “rule” as the result of his expulsion from China in September 2020 when his role as the ABC’s China Correspondent became one of the latest examples of the Chinese government’s displeasure with Australia.

The events leading up to Birtles’ hurried and harried departure – an event shared with the Australian Financial Review’s Mike Smith – are told in his book in a clear unsensational manner. Nonetheless, there is thriller-like quality to what happened as the Australian embassy worked to insure that Birtles and his Chinese partner should be allowed leave, with all this taking place against the background of Beijing’s readiness to engage in hostage diplomacy in the case of the Canadian “two Michaels”, and the looming problems associated with the arrest of Australian citizens Chen Lei and the then prospective trial for espionage of Yang Hengjung.

The expulsion of Birtles and Smith was indeed a major break with the hope that it was still possible for an Australian journalist to operate in China in something approaching a normal manner. In this regard, the contrast between the author’s treatment and that accorded the long-time BBC correspondent, Stephen McDonell, is surely a reflection of differing Chinese standards in which punishment of Australia was a key Chinese consideration. That said, it is proper to note that another BBC correspondent, John Sudworth, was forced to leave China in March 2021 as a result of his reporting on the treatment of Uighurs in Xinjiang province.

It is important to note that Bill Birtles was not in any sense a journalistic “blow in”, He had earned his spurs committing himself learning Chinese and later working at the Chinse news agency Xinhua.

Earlier, in 2008 at the time of the Summer Olympics, he had felt there appeared to be signs of some commitment to openness on the part of the state. Two years later, and well before his role with the ABC, he had concluded there was a fundamental truth about China that he summarises on page 46: it was “the Chinese government’s deeply embedded distrust of anything it could not control”. Once in Beijing in his ABC role, Birtles found this distrust grew ever greater as he spells out his experiences and the manner in which a range of official Australian policies were regarded with hostility.

Anything short of full-blooded praise is regarded with suspicion and so poses a threat to the state. The issue of China’s action in the South China Sea was treated as a domestic matter. So, for the Australian government to speak approvingly of the international arbitration ruling dismissing the Chinese claim to sovereignty within the “nine dash line” was a cause for sharp criticism. And the list of forbidden positions grew ever more extensive: Hong Kong and Xinjiang and the Uighurs are the most prominent examples of issues about which China sees its interests most deeply embedded.

In a relatively short book, the author covers most of the issues that have brought relations between China and Australia to their current low point, and he offers some thoughtful commentary in relation to each. He provides a sobering reflection on the pursuit of Chinese students by Australian universities, noting that we are not by any means the most favoured country for Chinese students to choose for their overseas study.

In his penultimate chapter, “An Independent Inquiry”, Birtles offers a straightforward summary of the sharp decline in relations between China and Australia that accelerated following Foreign Minister Marise Payne’s call for an inquiry into the origins of the Coronavirus pandemic. He points out that China’s hostile response was not the beginning of China’s displeasure with Australia but rather the latest in a series of reactions that had been going on for five years.  He observes that in their actions Chinese diplomats in China were acting in a “desperate” fashion only to find that with each blow the Australian public appeared unready to bend to China’s will.

Well, perhaps not entirely. For although Birtles’ book is not cast as a direct contribution to the debate on how Australia should deal with China, it is clear that this debate is very much alive in Australia at some levels. The recent three part series of articles by journalist Max Suich in the Australian Financial Review provided one of the most recently, vigorously argued criticism of the government’s position being a case in point, joining as it does  Paul Keating’s earlier criticism of the Australian intelligence community’s supposed role in shaping the government’s policies.

A book review may not be the place to enter into this debate, but I will offer one comment, not least inspired by what Bill Birtles has written. Whatever arguments are advanced for a “softer” approach on the part of the Australian government there is no reason to think that in the short term at least Chinese policies are going to change.

Democracy will not be permitted to exist in Hong Kong, China will not cease its persecution of the Uighurs and what is called justice in China will be of a different and fundamentally unacceptable character in relation to what takes place in Chinese courts. Since this will be, can we in Australia shape our trading relations with China with no regard to these circumstances?

Milton Osborne is a former Australian diplomat, intelligence official and writer. He is the author of The Paramount Power: China and the Countries of Southeast Asia and The Mekong: Turbulent Past, Uncertain Future
Go to Top