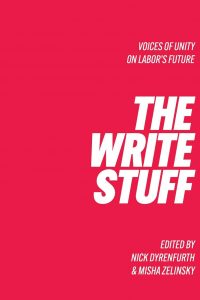 The Write Stuff – Voices of Unity on Labor’s Future

The Write Stuff – Voices of Unity on Labor’s Future is a significant book to understand the ALP today. Edited by the John Curtin Research Centre’s Nick Dyrenfurth and Misha Zelinsky, the Assistant National Secretary of the Australian Workers Union, the volume contains 30 short essays by prominent figures on the right of the ALP.

Contributors include ALP National President Wayne Swan, Deputy Federal Leader Richard Marles and a range of other prominent front benchers, unionists and other key party members. A notable absence is Joel Fitzgibbon, who resigned from the Party’s front bench in 2020.

Introduced by the editors and a chapter by Dyrenfurth, the book is an unashamed and deliberate attempt to claim a key role in the future direction of the Federal ALP for the right wing of the party, variously known as Labor Unity or Centre Unity in the States and Territories. The book is part of a continuing attempt to understand the Party’s loss of the 2019 Federal election and to influence future policy settings.

Some contributors note the ALP’s greater electoral success at the State and Territory level (including at the present time) than in the Federal sphere – contrasting, for example, the disastrous decline of the ALP’s federal vote in Queensland (27 per cent in 2019) with its three State election wins in a row.

A common theme is that the ALP no longer speaking on behalf of its previous natural constituency – working men and women in suburbs, towns and regions. Instead, it resorts to “speaking at” them on behalf of an inner city well paid “progressive” voters whose economic circumstances are greatly different to Labor’s former, traditional voters.

Several essays argue that the ALP – while needing to have a range of policies on all key issues (as is befitting an alternative government) – should be concentrating on fundamental economic issues relating to income, employment and social security. In the view of many contributors, these are the issues that determine the well-being of Australian families.

Dyrenfurth has written on some of these issues previously including in his Getting the Blues – The Future of Australian Labor  (Connor Court, 2019). The Write Stuff seeks to broaden the discussion and to consciously assert the importance of Labor Unity/Centre Unity in driving the fortunes of the Party: “without its Unity engine, Labor cannot operate at full capacity” the editors say. But the ALP Right has lost its sense of purpose and core beliefs – the problem is not factions in the ALP but the lack of ideas and values. In many respects, Dyrenfurth says, the core ideas of Unity have become indistinguishable from the “cultural dalliances and politically correct identity ‘woke’ politics and virtue signalling” of the left wing of the party. This will not endear him to sections of the Party.

Dyrenfurth draws attention to successful leaders of the ALP who he says predominantly came from the right (forgetting perhaps that Bob Hawke came to prominence by winning the Presidency of the ACTU with left wing union votes, defeating the right’s candidate, though he later did a right turn) but does not, however, idealise the right’s performance. He notes that:

… the Right has suffered from a perception of moral decline. In NSW, the Richo creed of “whatever it takes” has seemingly come to mean “whatever we can take” through the actions of certain individuals … Today’s balkanised factional system is often formed in the toxic world of student politics. It turns more on shifting alliances and personal rivalries than ideas.

Perhaps the ALP Right once knew what it was against: the left wing of the party whose members frequently drew inspiration from communists. In the absence of the Cold War struggles over local and international issues, none of the factions are sure what they stand for. The Right was always in favour of winning, but now the question is winning power to do what? What is the Party’s appeal to the electorate?

Thus, the central objective of the book is to begin to present a range of ideas around which the ALP can develop a winning campaign platform. But first there are several suggestions as to what the Party should stop doing. One of the most important pleas is that the ALP stops preventing people of religious faith from voting for the ALP. Dyrenfurth says that: “Today, people of faith are made to feel unwelcome in the ALP or feel compelled to hide or apologise for their beliefs.”

This view is well supported by two specific chapters in the book: Michael Easson’s Faithful and Labor – What Labor Ignores at its Peril and Sam Crosby’s True Believers. Easson is a former Secretary of the NSW Labor Council and very well read and knowledgeable in the history of the Australian labour movement. His essay provides a short history of the often troubled relationship between the ALP and faith communities and notes accurately that:

…this religious outlook is completely compatible with Labor and social democratic ideals. Showing people of faith that the ALP is not a hostile, anti-religious, secular, disdainful force means recovering an understanding of where we came from, our history, the best of our tradition, and to win. (Emphasis added).

Easson notes that difficulties that the ALP has had historically with its relationship with Catholic voters (since the ALP split in the 1950s and on-going) but also with the evangelical Churches: “If anti-Catholicism is the anti-Semitism of the intellectuals, as Peter Viereck once remarked, evangelical and Pentecostal dispositions are even more hostilely regarded”.

Easson calls for tolerance and respect and asks whether diversity is really lived as a core value. His views are supported by the powerful and persuasive essay by Sam Crosby, previously CEO of the NSW based McKell Institute and now Executive Director of the St Vincent de Paul Society. Crosby was the ALP’s unsuccessful candidate for the Federal seat of Reid in 2019. Drawing on experience as a candidate, Crosby writes of his discomfort when Liberal leader and PM Scott Morrison came under fire for his evangelical faith. Crosby writes that – as a Christian of a different denomination – he still felt that his “tribe” was being attacked. Crosby was concerned when the ALP campaign itself weighed in on the issue. He writes:

Like reflecting on the frog that was slowly boiled, we can now look back at a series of issues that put Labor and people of faith on different sides in 2019. As Andrew West so eloquently wrote in his election wrap-up: “[we had been asking] faith communities [to] choose between Labor and the God they worship” – at every possible point we had been framed, and allowed ourselves to be framed, as anti-religious.

Many other issues are dealt with in this collection of essays. The editors have assembled essays on a wide range of topics including those relating to workplace relations (notably by the SDA’s National Secretary Gerard Dwyer), and economic security (SA SDA Secretary Josh Peak), and others. Other essays include contributions on national security and geopolitics by Senators Kristina Kenneally and Kimberly Kitching (the latter tackling the China challenge in particular) and “industrial sovereignty” (Daniel Mulino).

In a short review it is impossible to do justice to all the issues raised by the authors. The essays vary in quality and in the specifics of what is addressed. But taken together, they demonstrate a broad understanding of the multitude of challenges facing Australia and its citizens in the 2020s.

The Federal ALP is currently reviewing its national platform. Some of the ideas in this volume will find their way into the membership consultations and policy debates already underway. Combing through the essays, it is sometimes difficult to find specific policy ideas. Rather, most essays try to establish what ought to be core values on which policies are developed. Taken together, this is a call for a reinvigorated social democratic policy platform and, indeed, for a return to the “labourist” traditions of the ALP.

Labourism eschewed radical socialism on the European model preferring instead a gradualist approach to improvements in the lives of ordinary citizens through representative unions and civilised means of settling both industrial disputes and establishing fair wages and conditions, supported by necessary government interventions in the economy to promote full employment and social security. Labor rightly claims that many if not most of the social key institutions that complement a prosperous economy and a secure safety net were initiatives of various Labor governments, many of which were opposed at the time by conservative political forces.

One of the relatively few specific proposals in the volume is Dyrenfurth’s call for a revision of enterprise bargaining, and a revised model of vocational education and social partnerships. It is not entirely clear if this leads to co-determination (worker directors?) on the boards of large companies a la the German/Scandinavian model.

Whether this last proposal has merit or any chance of implementation in Australia in debateable, but in this reviewer’s opinion, the destruction of unionism, polarisation of approaches to industrial legislation, flatlining wages growth, the assault on employer and union partnership in superannuation and the “Uberisation” of many sectors of the workforce means the re-establishing of a social compact at work and in society as a whole is an urgent social and political challenge facing the Australian nation. Measures by the ALP to re-connect with traditional faith communities from which the Party initially emerged and with newer faith groups will not hurt, either.

The Write Stuff is a very welcome spark to ignite this important public discussion.

Keith Harvey is a non-factional member of the ALP in Victoria. He was employed for many years in the trade union movement and is currently a director of an industry super fund.