LADIES IN THE PALACE OF THE LIONS

LADIES IN THE PALACE OF THE LIONS 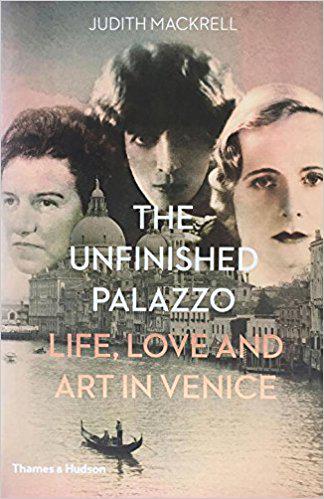 The Unfinished Palazzo – Love, Life and Art in Venice by Judith Mackrell

The lives of three striking, but very different, women are the flesh of Judith Mackrell’s The Unfinished Palazzo; the building – Palazzo Venier dei Leoni on the Grand Canal – in Venice is its spine. Weaving in and out of the lives of the twentieth century’s European and US artistic and literary elites, Mackrell has captured a chunk of history in a unique and alluring work.

The characters and stories of Luisa Casati, Doris Castlerosse and Peggy Guggenheim – three women who, over a century, fell in love with and inhabited the Palazzo at different times – bring the house to life again. The house became a way for each woman to taste independence, however briefly, and shun the constraints of social expectations.

For two of these women – Luisa Casati and Doris Castlerosse – freedom came at a terrible price. Only Peggy Guggenheim managed to take control of her legacy. Before her retirement, she organised the handover of her Palazzo and art collection to the care of her cousin’s New York Guggenheim “family firm”. She would comment on the collaboration as being as right as “proposing to someone who wanted to marry me”.

As Judith Mackrell explains in her Introduction:

There is a fine historical irony in the fact that a building [albeit never finished] designed to glorify a patriarchal dynasty and one that had been left to rot once that dynasty crumbled, was eventually rescued from obscurity by three independent single women.

Single they all might have been when they took up residence in the Palazzo Venier but, for all three women, marriage lay at the heart of their stories. That Peggy Guggenheim used a marriage metaphor when describing the handover of her collection to her cousin is instructive.

For their generations – from pre-World War I to the 1970s – marriage still held force in a woman’s status and respectability. For the nearly six-foot tall, and possibly Aspergers syndrome, Luisa Casati, money was “an element in which she moved”. But it was her marriage of convenience to old family gentry that gave her the Casati name and a title (Contessa) and, over a decade, the convenient protection as a married woman in a loveless marriage to move increasingly in her own circles, taking lovers and creating theatrical events in elaborate and expensive parties, donning fantastic costumes for portraits by famous artists and, in essence, developing herself as a “work of art”. After she took up residence at the Palazzo Venier, Luisa Casati added to Venice’s economy.

Henry Acton once opined that he found it “impossible to work out whether she was an extraordinary rarity or a brilliant fraud”. A wealthy and indulgent notable of her time, Luisa had no head for economies or financial investment. Her houses were her stages, her lovers her entertainment and her tantrums just part of her emotional baggage.

Luisa collected exotic animals, was known for walking with her cheetah and wearing her pet snake as an accessory below her unruly crop of red hair; she achieved status as a modern “decadent”, using drops of belladonna to dilate her distinctive pupils. Her affair with the notable Italian writer Gabriel D’Annuncio was fraught with her hot and cold demonstrations, albeit making fun of his old style male dominance of female lovers who remained at his beck and call.

At the Palazzo, after 1912 when it had been redecorated, one party extravaganza saw hundreds of Venetians watching from the canal, some renting rooms from which to view the partygoers. The cost of her entertainments acted out in the manner of holding court, as much as in competition with Lady Cunard’s entertainments, sapped Luisa’s finances. And World War I, when it came, would sap many appetites for such extravagance. But not Luisa’s appetite for art and artistic lovers. Along the way, she offered patronage to Serge Diaghilev, Picasso and was briefly the lover of Augustus John.

More and more Luisa became a circus, visiting the United States in 1925 where the press tracked her movements as a figure of rare mystery and romance. But she was also by then addicted to drink and drugs like her old lover D’Annuncio. She lost the tenancy of the Palazzo in 1924 and by 1929 was hopelessly in debt. By 1939, Luisa was reduced to living in a variety of tiny central London flats where she spent the rest of her days.

Mackrell’s is only the latest portrait of Luisa but it is one that locates her most completely in her setting both historically, as a somewhat tormented woman of her time, and artistically on her stages like the Palazzo with her accoutrements and charades. You can Google her name to see all the other portraits.

For Doris Castlerosse, the Palazzo Venier is not just an abode but a purchase.

A Becky Sharp of her time, as the child of middle class south London parents, Doris Delavigne made her way into posh circles through her beauty, and by becoming adept at parting wealthy lovers from their money. Even Winston Churchill took up with Doris at one stage, as did his son Randolph. As Mackrell puts it, early on in her adult life Doris realised “she would have to use sex as a means of trading upwards”. Unlike the awkward beginnings of Luisa Casati – wealthy and unconfident as a teenager – Doris had ambition:

Doris would never have considered herself a prostitute, a woman for hire, yet she was definitely candid about her way of life. She had a touch of larceny in her veins, a high careless style, and she cultivated these qualities as a knowing element of her charm. She liked to flaunt the one obvious flaw in her beauty, the gap between her front teeth, because she believed it made her look “lucky and sexy – and how”.

Doris’ aim was to marry a high-ranking Lord but eventually, in May 1928, she settled for the best on offer by marrying Viscount Castlerosse who wrote a personal column for Max Beaverbrook’s Sunday Express. The marriage was tempestuous. Noel Coward’s warring couple in Private Lives is said to be based on the Castlerosses. Within four years, Valentine Castlerosse wanted a divorce. They separated but were not divorced until 1938.

Like Luisa Casati, marriage gave Doris the status she needed. While separated, she enjoyed other lovers, among them Cecil Beaton with whom she had a quite serious affair. But her risqué adventures meant she also had to endure spite and malice from women like Edith Olivier.

As her financial fortunes dwindled with her spendthrift ways, it was Doris’ relationship with a woman that led her to the Palazzo Venier. American heiress Margot Liddon Flick Hoffman first met Doris in London in 1935. They met up again in 1936 on an extended tour of China while Margot was on her honeymoon. Instead of returning home with her new husband, Margot went home with Doris. She had fallen in love. For Doris, Margot would be her richest plum for the picking. Together they bought the Palazzo Venier in the autumn of 1936.

With the drama of a Greek tragedy, however, Doris would only play hostess to the famous in her Palazzo very briefly. War overtook her and she was forced to return to England, divorced and alone. Her death from an overdose in 1942 came after bouts of depression as her fortune and looks faded. Ironically, in London at the same time, Luisa Casati was managing with a small stipend from her daughter in a tiny flat in Knightsbridge.

While all three women had famous friends in common, Mackrell does not labour their common connections. They are drawn quite separately and this is a strength of the book. Only the Palazzo really connects them. And it is Peggy Guggenheim, wealthy and adventurous, whom Mackrell rounds out as the true saviour of the Palazzo Venier.

Born in 1898, Peggy Guggenheim hailed from the wealthy New York family of that name but from the less wealthy branch. Still, in her early adult years, and wanting to disguise her “Jewishness”, it was nothing for Peggy to spend $1000 getting her nose fixed. This poor little rich girl, seeking to escape her bourgeois origins, soon found a niche in the eclectic artistic circles of New York while working at her cousin Harold Loeb’s (part-owned) radical bookstore Sunrise Turn. It would begin a life for Peggy – a life among artists and the arts but never quite one of them.

After living in Paris and England, two failed marriages (writer/sculpter Lawrence Vail and painter Max Ernst), hundreds of liaisons and some notable affairs, including with writer John Holms and Samuel Beckett, Peggy had become both well read in the liberal arts and confident of her sponsorship of emerging artists. She had opened the Guggenheim Juene in London in 1938 with an exhibition of Jean Cocteau drawings. And, during the Second World War, she collected and helped preserve abstract and surrealist art works that would be worth a fortune later. After fleeing Europe for New York with an assortment of family she had opened The Art of This Century Gallery. Jackson Pollock was one of her many “discoveries”.

But it was Venice that captured her soul in 1948, where she presented a pavilion at the reopened Biennale. And, in looking for suitable accommodation for her collections, it was with Doris Castlerosse’s brother that she arranged the purchase of the Palazzo Venier dei Leoni.

With Peggy Guggenheim and the Palazzo, Mackrell is able to draw her book to a grand finale as she sketches how Guggenheim constructed a revitalised purpose – both for herself and the building – around the Palazzo over the coming years.

From a derelict ruin that had been used as an army billet, Guggenheim revived the Palazzo as her museum to modern art, among which she lived in her palace on the Grand Canal. Like Luisa Casati, she became a curiosity, floating in her gondola.

Guggenheim’s contribution to the Venetian economy was self-sustaining. Unlike Luisa, she never allowed indifference to damage her personal fortune.  Like Doris, she had a sexual appetite and was adventurous. But she was passionate in her affairs as opposed to Doris who traded sex for financial gain only to be left with nothing. And, unlike Doris, Peggy mastered her disappointments, of which she had many.

Mackrell avoids a feminist treatise at every turn. Yet, in her engrossing tale of three remarkable female identities over the best part of a century, she captures the strength of female creativity in new ways.