LAUGHING TILL THE END – WE ALL NEED IT

LAUGHING TILL THE END – WE ALL NEED IT 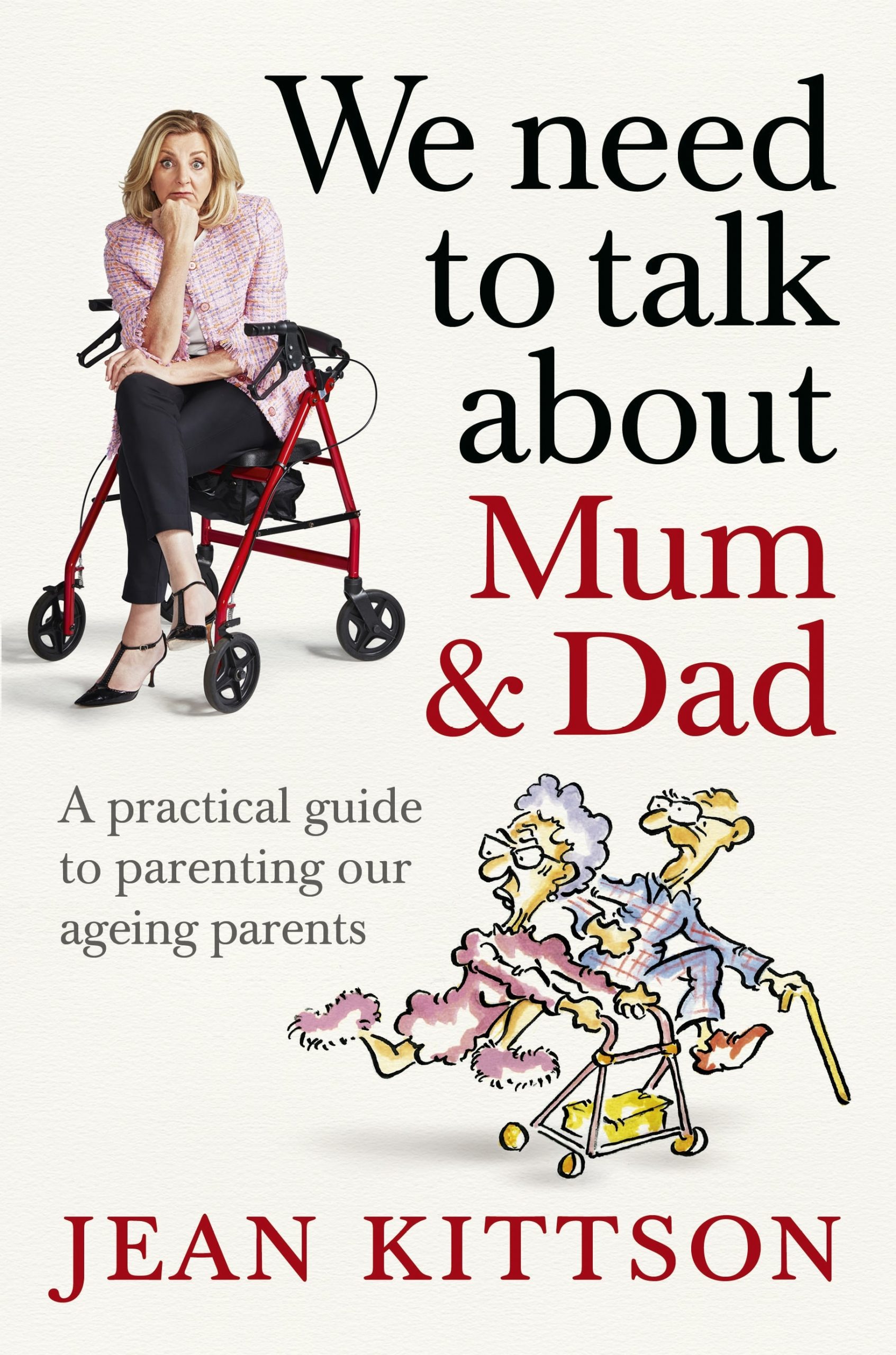 It’s not something we try to think about. Dying. Certainly not for ourselves – though we do expect our parents to die before we do. And, increasingly, the generation born post World War II, otherwise known as the baby boomers, is discovering that parents often do not die suddenly but, more often, age and decline to a point of being almost as helpless as their own children were as tiny tots.

So let’s thank Jean Kittson for her new book We Need to Talk About Mum and Dad – a Practical Guide to Parenting Our Ageing Parents which is not only close to a family bible on navigating the minutia of ageing and accommodating the depreciation it brings but also full of the Jean Kittson wry take on life, the family and dare we say it the bureaucracies that run our lives. With its Patrick Cook cartoons delightfully expanding the comedy of life involved.

Jean Kittson – along with her younger sister and brother – began talking about their Mum and Dad when their parents were in their seventies. The parents are now in their mid-nineties. Over almost twenty years, Jean and her siblings have learnt a lot about ageing and their parents’ needs – the book is a result of Kittson believing that recording in an entertaining and informative way all that she has learnt can only help others not to make the mistakes she did.

In the case of the Kittson parents, they belong to the generation that believes there is no need for a doctor unless you are critically ill – they have never, Kittson declares, gone to a doctor for a checkup, her father regarding doctors much like dishonest motor mechanics who always find something to repair for the money.

Looking back over two decades, in a talk to The Sydney Institute, however, Kittson charted some of the medical hurdles she and her siblings encountered as they talked about Mum and Dad throughout a couple of decades of growing old:

Between the two of them, they have had a broken hip, a broken shoulder, a broken femur, two strokes, prostate cancer, two heart events, various skin cancers and chronic wounds and both have lost their sight. My mother is legally blind and my father uses a jeweller’s loupe to peel potatoes.

From the outset, Kittson recognises that the first hurdle is societal. In the society of the twenty-first century Western world, growing old has lost its place in the natural order of things. Ageing is now seen as a problem for the community and the wisdom held collectively by those who have some seven to nine decades of experience is now regarded as useless. Where once the elders of a community passed on valuable skills and advice, today it is only the younger brains that are seen to hold the key to advancement as a nation or civilisation. As Kittson puts it:

As far as many busy families are concerned, it’s back to the cave and the second-best rug and the sandwiches, while the rest of the family moves on in search of the fabled land of Lifestyle.

Throughout the book, Kittson uses the term “elders” instead of “elderly” and the mere use of that term returns the dignity that has been lost in the treatment of older citizens by social norms. It is with that dignity and respect that Kittson painstakingly moves through the other hurdles she and her siblings encountered as she talked about Mum and Dad, with Mum and Dad, while they stayed with them as they moved into their nineties.

The “guide” is a most accessible volume. The Contents chapters and the issues they cover are comprehensively listed over nine pages at the front. For those who simply want advice on a particular matter this is an essential key. At the back there is a glossary of the many acronyms used around aged care, medical matters and the associated support available from both health facilities and government institutions. Then there are lists of further reading, websites, organisations involved with ageing and 200 questions to ask before committing an elder to a care facility.

Embarking on the challenges faced by ageing parents, perhaps the initial one is parents not accepting that they are gradually facing more and more limitations on their physical and social abilities. This is not something that is easily overcome and Kittson illustrates many of the moments the family confronted as parents resisted their children’s attempts to help them avoid mishaps, even disaster, as they became more frail.

Kittson, humour at the ready, recounts how her parents resisted any suggestion they should move from their family home even as it needed major repairs and was no longer fit for purpose for two sight challenged octogenarians:

Mum (legally blind and loudly deaf) and Dad (two new hips and a couple of health issues which are unresolved because he isn’t letting any bloody doctors NEAR him) were still holding themselves together, but their house wasn’t. It had an upstairs balcony which was held up by two loose bricks and was ready to plummet into their little pool because Dad was either fixing one or cleaning the other, or both, and there were a few things they simply could not do anymore. Riding an avalanche was just one of them.

On another occasion, Kittson’s father avoided a surgical procedure by inventing a friend called Bert who called the surgeon’s office and cancelled the appointment.

Inevitably, reality comes to us all. Even if only by misadventure. So, it is with the Kittson tribe. This ensures that Kittson and her siblings enter the minefield and mazes of the bureaucratic infrastructure around what we know as aged care services. The first piece of advice Kittson has is to keep a notebook:

The notebook is where you write down everything concerning your parents. Use it as a diary … Please note: every time you speak with Centrelink or My Aged Care, ask them for the reference number of that conversation. If you have this reference number, the next person you speak to will be able to find the record of your previous conversation straight away. Believe me, you will need this trail of cake crumbs … You will need certified copies of birth certificates, passports, marriage certificates and driver’s licences or photo cards. And you will need multiple certified copies because many government departments require you to give them copies which you won’t get back.

Such is Kittson’s experience of bureaucracy around aged care she writes: “There are few phrases as alarming as ‘interaction with the government’. Sometimes it evokes the image of waiting downstream for a glacier to reach you. Sometimes it is like trying to outrace molten rock lava down a hill.” Clearly there is no easy passage to comfort in aged care.

The experiences Kittson takes her readers through are not only life learning and at times amusing, if not so for the participants at the time, but also offer strategic and forewarned-is-forearmed information for a generation that will see aged care services spike in the next decade or so.

Kittson’s book also gives us cause to reflect on why nations around the Western world have suffered overly heavy fatalities from the pandemic in nursing homes. Clearly, there is a need to regulate more the ways in which care for the aged is dispensed. Do inmates of nursing homes need to be institutionalised to the extent they are? And, if so, why are regulations in nursing homes not more in keeping with those in hospitals?

Kittson and her parents made it through a couple of decades of ageing. Now, in their mid-nineties, Kittson’s parents live in a retirement home with multiple services on tap. They have not needed an aged care facility – thanks in no small part to their devoted daughter and her siblings.

But not everyone has such a team at their disposal. As a bedside bible, it could be that a copy of We Need to Talk About Mum and Dad – a Practical Guide to Parenting Our Ageing Parents should be necessary reading not just for the children but also the mums and dads (and any childless citizen over 70) about to face their own decade or so of ageing.