LIBERATING ITALY FROM THE FASCISTS

LIBERATING ITALY FROM THE FASCISTS 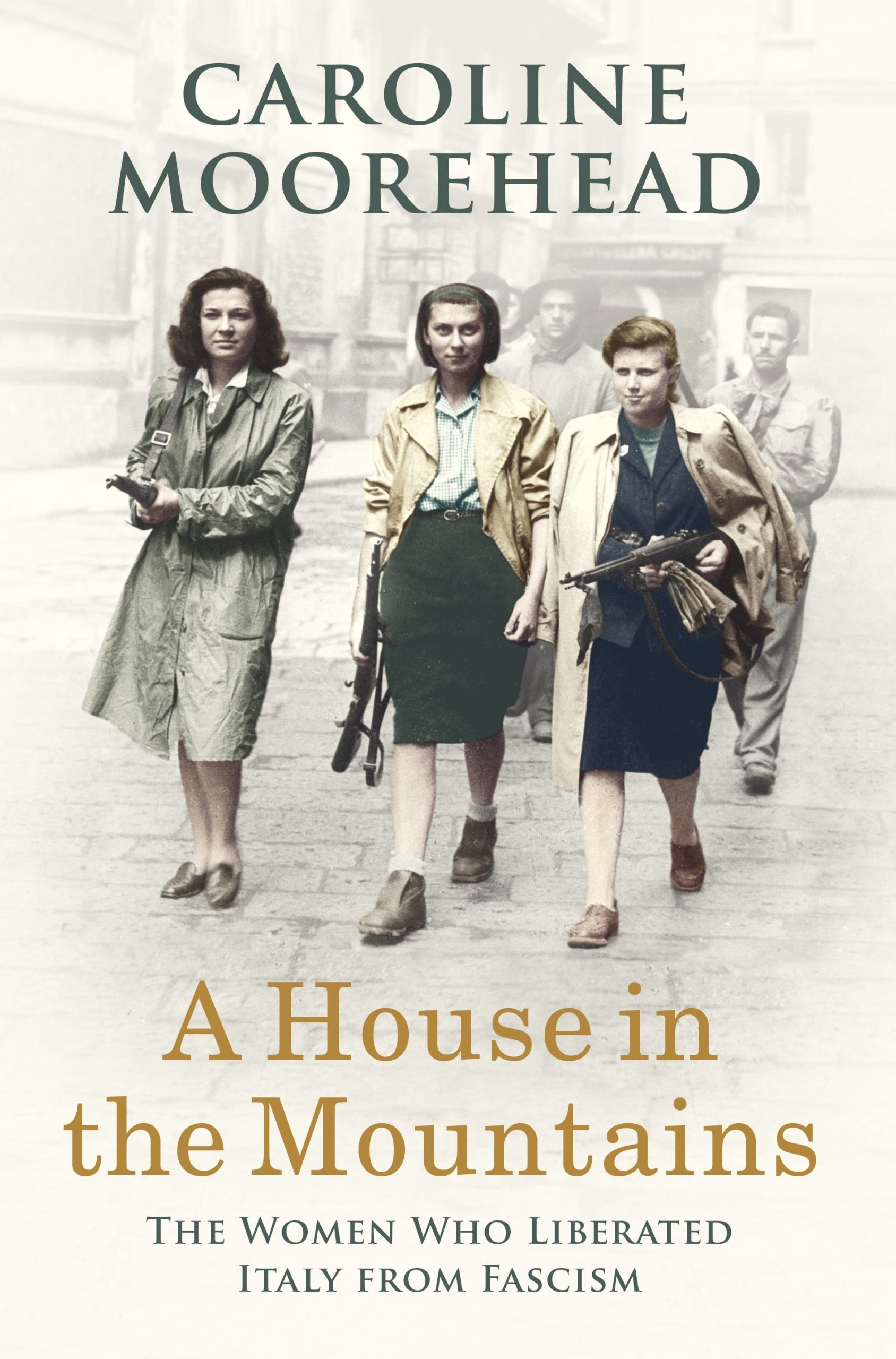 As the world undergoes a revision of historical monuments, care of the protests led by Black Lives Matter, it is timely to reflect on the work of historians and what the human story owes them. The traces of the past are exactly that – mere remnants of the whole story. It is the work of historians to piece those remnants together to delve into what the bigger picture might have been. So often – as with statues and monuments – it is only the heroes or victors who are publicly honoured while lesser players are left in the shade.

The achievement of Caroline Moorehead in A House in The Mountains – The Women Who Liberated Italy From Fascism is to pull out of the shadows, in graphic and heart stopping detail, the many who were not honoured for their part in the liberation after the defeat of Germany in Italy. Those figures, in most cases, are women.

In spite of the fact that there were more women in Italy’s Resistance ranks (some 35.000) than in any other part of Europe in the years 1943-45, the marches in Italy organised to celebrate the victory over Fascism in 1945 included very few women. “Normalisation” for Italians “did not include the idea of women as fighters”, writes Moorehead.

This was exemplified in the outpouring of Italian literature – “novels and memoirs, exalting and mythologising the Resistance” – in the years immediately after the liberation when 4,500 such were published in 1945 and another 6,500 in 1946. Almost none were written by a woman and mentions of women are few, if any, in these texts. Perhaps this was the result of women being forced back to traditional home making roles after the war leaving them little time to write. Perhaps the women of Italy who had made up such a large part of the Resistance felt they were up against a mightier foe – Italian culture. Italian women attained the vote as late as 1945.

Nonetheless, like others in a subverted social position, these women have left their records. And Caroline Moorehead has used these traces of a formidable army to restore to history many figures of importance long since forgotten.

The fight to liberate Italy after 160,000 Allied soldiers and 600 tanks landed in Sicily in July 1943 was a bloody and bitterly fought campaign that lasted some 20 months. Benito Mussolini was forced from power soon after the Allied landings in Sicily and taken into custody. Then, in September 1943, the Germans took Rome, freeing Mussolini and installing him in northern Italy as head of a puppet Fascist government called the Italian Social Republic (Salo). But, in May 1944, the Allies won the four-month Battle of Monte Cassino (Battle for Rome) and the Germans collapsed, moving north and turning on the Italians.

Moorehead describes the bloodletting of the German retreat in brief but stark detail illustrating the contempt the arrogant Germans had for what they regarded as the inferior Italians. Sadly, with a similar disdain from Winston Churchill that Italian resisters were “political cripples” and Foreign Secretary Anthony Eden’s dislike of Italians generally, this meant it would be the Italian fate to be squeezed like a lemon in the fight to come.

Four women are the spine of Moorehead’s complicated and vast canvas – Ada Gobetti, Bianca Guidetti Serra, Frida Malan and Silvia Pons. The setting for their war is northern Italy around the city of Turin and the mountains beyond, otherwise known as Piedmont.

The four women came together in the Resistance – friends Bianca and Frida after Mussolini’s anti-Semitic laws of 1938 which attacked their student friends who were Italian Jews. Ada was a decade and more older than the others, widowed with a son in 1926 when her husband Piero died from beatings he had received as an anti-Fascist. She was a foreign language teacher who had become involved with the Resistance since helping her husband with his publications. In the late 1920s, her friendship with life senator, historian and philosopher and renowned anti-Fascist Benedetto Croce sharpened her focus. Silvia Pons, a doctor who was part of the partisan brigades as a staffetta helping tend wounded members, was a childhood friend of Frida.

Moorehead’s book is, however, much more than the stories of these four women. They are figures that link the larger story that is Piedmont’s part in the Resistance, the partisan brigades of anti-Fascists. It is a battle on many fronts, intensified by the splintered nature of the enemy they faced (Germans and the forces under Mussolini) and the savagery of the Germans in reprisals against the Italian population. Writes Moorehead: “As a priest in Gaeta observed, overnight the Germans turned from allies into wild animals, intent on death and destruction.”

By the summer of 1943, Turin had been reduced to penury. As Italian men had been sucked out of the civilian population to fight, women responded in kind as part of a guerrilla war and underground, resisting the Fascist forces now weakened with the removal of Mussolini in Rome. Many of the Mussolini prisoners of war were also released after his capture to add to the ranks of this underground army. What became the partisan brigades – of which the four women Moorehead singles out were members – now took over the Resistance.

Never a strongly centralised movement, the Resistance operated locally relying on networks of friends and relatives. The political allegiances of this group varied widely from communists to those simply seeking freedom from the Fascists.

As the German retreat intensified, the Resistance made the mountains a key area where Jews, partisans and Allied escaped prisoners of war on the run could be hidden. When the four women and their partisan colleagues were not operating from Ada’s house in Turin, they worked from Rollier House in Torre Pellice and the Val Pelice became known as the “cradle of the resistance”.

As the Allied campaign squeezed the German forces in Italy, German reprisals against the Italian population increased. For any attack on German units or officers, tens of Italian citizens would be shot in public squares. This was followed by a major campaign against partisans whose tactics at blowing up railways bridges and generally sabotaging Fascist forces had effect. At Hitler’s command, partisans were to be “massacred, killed, annihilated”. Public hangings became commonplace, along with burning and pillaging of villages and slaughter of every kind. In mid-November, the Fascist forces under the Salo (Mussolini) became active in Hitler’s Final Solution and the rounding up of Italian Jews began.

The reprisals were formidable. One photo in the book shows a woman partisan, 32-year old Cleonice Tomassetti, leading a group of 42 men behind a sign reading “Are these people the liberators of Italy or are they bandits?” They were being led to their execution after torture in the cells. They were made to walk five kilometres and were all then shot – Cleonice one of the first to die.

The chilling reality of the bloodshed and terror enacted on the Italian population was only outdone by the sheer heroism of thousands – and so many women. Matilde di Pietratonio was a specialist in kidnapping high profile citizens who could be traded for the release of imprisoned partisans. Suor Giuseppina – a Daughter of Charity nun – mother superior and director of Turin’s Le Nuove prison female section risked her life to save the women under its roof – from death, torture and violation.

Suor Giuseppina’s wiles at protecting prisoners, even helping some escape, took on legendary levels but she could only contribute marginally amidst the overall horrors of the torture and privation. Moorehead writes: ”Sometimes, when the screams of the tortured prisoners were very loud, Suor Giuseppe played Schubert’s ‘Ave Maria’ on an ancient creaky piano in the central hall to drown out the sounds.”

As women became more significant in the Resistance, their acts of courage knew no bounds. Mothers wheeled prams and babies about with smuggled items from propaganda literature to guns hidden under the blankets. Laughing girls, bent old women laden with shopping or washing hiding weapons. A few even managed to fool the Germans and get lifts on the back of their trucks. On their bikes they travelled into the mountains carrying messages and networking. They saved prisoners of war, Jews and comrades. They experienced the most daring of escapes. Many endured prison, some not surviving, some being let free or escaping.

As Ada and her comrades continued the war effort towards liberation they felt themselves being liberated from the age old norms that held women back. Ada, heading part of the GDD – Groups for the protection of women and for assistance to fighters for freedom – became a mentor for others. She worked the factories of Turin gaining supporters for the anti-Fascist groups. Together the four women were a strength apart. As the factories stoked the partisan forces, churches became places of safety for the hunted.

That the partisan groups endured through to the liberation is remarkable. Facing not just one but two enemies, the north of Italy became a civil war zone – Salo and the Germans not always happy allies and the partisans under attack from both. The bitter winter of 1944-45 might have finished off any ordinary guerrilla force. In one month of that tragic winter, the partisans lost 2,700 of their members. Their songs became refrains of hunger, ice and fear. But the Salo forces were themselves disintegrating, while the Germans looted what was left of northern Italy. Desertion from the Fascist ranks was higher than at any other time or place. And the Allies were breaking through.

The liberation was at first a great joy. Ada emerged from the war as the deputy mayor of Turin. She would work as a political organiser for many years. But the peace brought a mixed blessing as the Allies sought to engineer a new Italy. Tensions between partisan or resistance groups and those representing an older order would not cease easily. Yet, in many ways, that would be the story of Europe over the decades to come.

In restoring the women of the Italian Resistance to a place in history, Caroline Moorehead has done a lot more than erect a statue in their honour. She has committed their memory and their courage and their legacy to the pages of history where they cannot be removed.