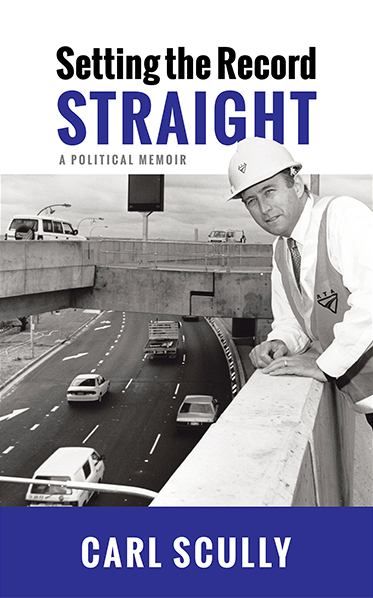 Setting The Record Straight — A Political Memoir By Carl Scully

Former New South Wales Premier Morris lemma told the Sydney Morning Herald that if Carl Scully wanted to know why he did not become premier he should look in the mirror.

Well, Carl Scully has been doing a lot of reflecting. The result is a very detailed but entertaining political memoir of 460 pages. Its title Setting the Record Straight – a political memoir could easily be entitled “Getting Square”. No opponent Scully encountered, in a long and eventful career in politics, emerges unscathed from his action-packed account of his journey.

Born in 1957, Scully grew up in Chatswood. He describes his father as a “soft Labor supporter” and his mother as a “pretty strong Liberal supporter”. However, there was a Labor family heritage. Scully’s grandfather in 1920 was elected to the NSW Parliament. His great uncle was a member of the federal parliament between 1937 and 1949 and served as a Minister in both the Curtin and Chifley governments, a pedigree which was a source of pride and inspiration to young Carl.

Carl became a convinced Whitlamite. Having joining the Labor Party as an 18 year old, he immersed himself in factional warfare on behalf of the Right of the party. Finishing an Arts/Law degree from Macquarie University, Scully practised for a while as a solicitor. Unfortunately, the book provides few details of his legal career. This would have been of interest to readers of Workplace Review as he once instructed the one of esteemed co-editors of this journal.

Anyone interested in entering parliament would do well to study the careful planning undertaken by Scully to gain Labor Party pre-selection for the state seat of Smithfield. Elected to state parliament at a by-election in 1990, Scully continued as a fierce warrior for the ALP Right wing. Entering parliament as an opposition member, he asked one of his factional colleagues, “When are we going to get stuck into them?” He had to be told that being in parliament required one to get stuck into the government, rather than the party’s Left.

No doubt, as a non-drinking vegetarian, Scully was a puzzle to the carnivores and Reschs drinkers in the Labor Right. This was compounded by the fact that, despite his Irish Catholic background, Scully was an atheist. This revelation brought a look of horror to the face of the Legislative Council president, “Johnno” Johnson, who was very much part of the Right wing papal mafia.

Scully worked out early that to climb the greasy pole would owe more to mates than merit. He therefore attached himself to the “Terrigals”, a sub-set of the Right guided by Eddie Obeid, Sr. The faction acquired this name from the location of Obeid’s holiday home also known as “The Plotting Shed”. The Obeid weekender also served as a private meeting place for Obeid and his acolytes.

Scully makes no secret of his closeness to Obeid. In fact, when Scully was elected to the Ministry he was prepared to give up his spot for his patron Obeid. Having gracefully declined the offer, Obeid had to wait four more years to get into the Ministry.

Joining Cabinet after Bob Carr’s 1995 victory, Scully served in a number of portfolios. He spent the longest period as Minister for Roads and Transport. From this vantage point, he provides an insider’s account of the Carr and lemma governments.

Carr was, in Scully’s view, the non-executive chairman and the Treasurer, Michael Egan, the government’s chief operating officer. Nevertheless, Carr was the master communicator, his handling of the media constantly getting the Carr Government out of trouble.

No one doubts Scully was a hardworking Minister. In fact, he has reproduced a day from his ministerial diary to make his point. Unfortunately, Scully had a falling out with Egan almost from the beginning of the government. This enmity was a serious obstacle to Scully proceeding with major infrastructure projects. However, Scully did deliver large undertakings and significant road safety reforms. One anecdote of Scully’s exposure to the workings of Cabinet Government deserves be quoted in full:

There is a room full of relevant public sector CEOs, several relevant ministers and advisors. Perhaps 30 or so huddled in a small room just next to the larger cabinet room. Premier Bob Carr was in the Chair. I said to the Treasurer: “Treasurer, that is a whole lot of treasury, purchaser provider gobbledegook” and his response was priceless; “You are a fuckwit.” I then retorted, “l always know when you have lost an argument, as you play the man and not the ball.” And his response was even better: “That just proves you’re a fuckwit.” Carr stepped in and asked Egan to calm down before the Treasurer chimed in again with: “Okay, but he’s a fucken prick.” Nothing like a good intellectual discussion in the New South Wales cabinet!” (page 297)

On hearing of Carr’s resignation, Scully believed his moment had come. When announcing his nomination with the premier, Scully told the mediator, “l will bring sparkle and verve to the job.” He has been dogged by the nickname “Sparkles” ever since. Having for years dreamed of being premier, Scully had developed a detailed policy blueprint that he would implement on becoming premier. The present government would be wise to study the reform agenda Scully includes in his book.

“mates” is told with searing honesty. Obeid, Joe Tripodi and Labor secretary Mark Arbib, made the choice that Morris lemma had a better chance of winning the next election. Scully and his hopes were jettisoned by the hard heads of the Right.

Rab Butler and Roy Jenkins. Men who had made their mark in parliament and cabinet and were labelled as future leaders, palpable, but never attained the leadership of their respective parties.

Worse was to come at the hands of lemma. Scully was sacked from Cabinet for allegedly misleading parliament on two occasions. He then made what he now considers a big mistake. He left parliament at the 2007 election.

Although out of parliament, Scully, in an act of schadenfreude, chronicles lemma’s inglorious time as premier. Scully does not forget to record lemma’s and Treasurer Michael Costa’s then futile and politically fatal attempt to privatise the state’s electricity assets.

The book ends happily with Scully having enjoyed a successful business career after leaving parliament.

Any current or aspiring member of parliament should read this book. It gives a compelling account of how to attain, keep and use political power. It is also a great read for anyone with a deep interest in New South Wales politics.

Malcolm Kerr OAM was a busy Sydney barrister before becoming member for the seat of Cronulla for the Liberal Party, 1984-2011. This review was commissioned by and will appear in the Spring 2017 issue of Thomson Reuters Workplace Review.