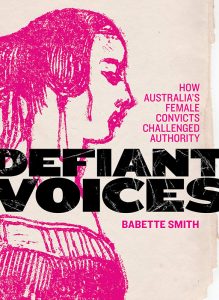 On the very wet night of 13 July 1781, John Price was drinking in William Wood’s pub “at the bottom of Chick-lane”, when one Elizabeth Barber, age 24, sat beside him. After a little haggling, a price was struck for him to “lay with” her in an upstairs room. But in that room Barber, with the help of another prostitute, seized from the sozzled Price his watch, and this valuable possession promptly found its way into the hands of William Wood. At the subsequent Old Bailey trial, Wood was sentenced to 7 years transportation to Africa. And Elizabeth was sentenced to death. On commutation, she endured several years in hulks, before being dispatched to Botany Bay on the Price of Wales. On board she spent ‘extended periods in irons and handcuffs, during which she continually yelled her head off’, inviting Captain Meredith to “kiss her cunt”.

In this colourful and beautifully illustrated history of convict women, Smith sees Barber as setting a style for female felonry which has been overlooked by earlier history : “distracted by our feminist preconceptions … we missed how loudly the voices of women convict voices ring out” (p. 251).  Defiant Voices, then, seeks to assimilate the conduct and experience of convict women into a familiar left historiography of “resistance”.

Rich material for such an interpretation is provided by the spectacular riots that recurred at the “female factories” at Parramatta and Tasmania. These include the breakout of 100 female convicts from the Parramatta factory in 1827; another breakout numbering 50 in 1830; and further similar disorders in 1831, 1842 and 1843. The crowning chapter of this phenomenon was a two-day riot in 1841 at the Launceston “factory” (p. 209), which was only finally put down when 50 male convicts were sworn in as special constables.

Besides such dramatic episodes, Smith includes among the inventory of resistance, “language, liaisons, extravagant behaviour, cheek and general disruption”; point blank refusals by assigned female convicts of their master’s instructions; and the act of absconding from their master’s household, with the hope of passing for free in Sydney and Hobart.

But did such conduct indicate a spirit of rebellion? Or simply the dearth of penalties for female convict misbehaviour? Irons were a “very unusual female punishment”, writes Smith, and the flogging female convicts was forbidden from 1818. On the other hand, female convicts were sometimes flogged before then. And, throughout the period, the shaving of the head was a punishment they shrank from; and the authorities had miscellany other penal devices to control refractory women, including very unpleasant-looking “confinements boxes”.

A deeper criticism of the Smith’s resistance narrative is that it conflates resistance and adaptation, two very different things. Specifically, it confounds working against the system with “working the system”, which is something else entirely.

The most salient means of “working the system” was prostitution, both on transports and in the colony. And it appears to have been endemic. The surgeon of the Princess Royal (1829) believed that every member of its 29 man crew was sexually involved with their female convict charges. He blanched at the memory of “twenty wicked eyes winking at him”.

From prostitute to kept woman. Thus on Norfolk Island Ann Inett became the mistress of Philip Gidley King. It has also been claimed – not by Smith – that Arthur Phillip had a mistress in Deborah Brooks. The evidence for this contention is thin to the very verge of non-existence, and is plainly an attempt to plant a Sally Hemmings on Phillip, and so drag him down, as Thomas Jefferson has been, as a male exploiter of females. In this terrain of sexual contact between free men and convict women, a victimhood historiography of female convicts is ever ready re-assert itself. But prostitution is not sexual slavery; convict women were paid in tea and rum. And, whatever she did or didn’t do, Deborah Brooks, note, was a free women, who wasted little time in returning to England.

In the annals of the felonry of New Holland there are, in fact, few indications of sexual coercion of, or violence against, its female portion. Courts occasionally dealt with gang rape. Thus, as Smith relates, in 1795 three convict rapists were sentenced to 500 lashes; surely a death sentence. In 1834 police recorded that Eliza Murphy died “from a gross assault upon her person”.  Putting aside these horrors, the reader will find in Defiant Voices more cases of sexual assault of convict women by convict women than of convict women by men. To convict women, men were a means of working the system. We read of the daughter of a convict who “screamed the place down” when Captain Gillman entered her bedroom (p.174). But as far as convict women were concerned, “[M]ale invasions,” writes Smith, “appeared to cause raucous celebration.” (p. 187)

Beyond prostitution – and beyond “working the system” – there emerged an “astonishing number of long-lasting relationships” (p. 76) between the convict women with free men. And not only former convict free men.

Consider legal profession: Richard Aitkins, the first Judge Advocate, married Mary Beckwith, and took her back to England; while David Collins, the Deputy Judge Advocate had a “long lasting” relationship with Hannah Power.

And, of the New South Wales Corps, one may record William Lawson, the explorer, who fathered 10 children by Sarah Leadbeater; and George Johnston, the Corps commander, who is buried side by side his convict wife, Esther Abrahams, at Waverly cemetery, by the Pacific Ocean.

These intermarriages were not just for a minority. An extraordinary proportion of convict women applied to be married while under sentence; of various subsections of convict women, historians have estimated 50 per cent, 59 per cent, 60 per cent did so. Even the hair-raising Elizabeth Barber quickly married; a Thomas Brown, nurseryman at Parramatta, and she bore him three children.

This race to marry was no “defiance of authority”. It was neither working against the system, nor “working it”; but very much working within it.

But the ultimate working within the system was deciding to go straight. For they were crooked to begin. “It is impossible to describe how bad they are”: thus Deborah Brooks’ description. But Defiant Voices records numerous cases of them electing to reform.  So Catherine Mangan: delivered to the Factory in a drunken state, she, with the passage of years, finally earned a character reference from Samuel Marsden, no less. On page 146, her respectable visage in old age looks at the camera, perhaps a little impatiently. Several other photo portraits in Voices visually record onetime “London whores” in respectable old age. Such transformations into propriety were a familiar marvel nineteenth century  Australia; and it was a maxim of that society that it was easier to make a lady than to make a gentleman.

Many convict women, then, made themselves respectable. But did they make Australia, as Smith suggests? By the salient economic criteria they made, in truth, small contribution. Their productivity as convicts was low; there was never enough clothes washing, goat keeping etc to keep them occupied. The frontier was, indeed, no place for a woman. At some point or other, women have filled just about every role in human society; but has there ever been a female explorer?

But they did make one truly essential contribution. In a letter home to England during her brief sojourn at Sydney Cove, Deborah Brooks declared she “must not omit observing that our Colony is very fruitful, as I am informed there are upwards of sixty of the women convicts at this time pregnant”. And convict women were not only prolific: their offspring, remarkably, did not reproduce the criminality of their parents; the result, perhaps, of a deliberate decision of the mothers to raise their children straight? Within a few years Governor Hunter was to remark “the charming children with which they have filled the colony”. The indispensable legacy of female convicts to the country were these children, and their descendants.

The author is among them.

William Coleman is the author of Their Fiery Cross of Union: A Retelling of the Creation of the Australian Commonwealth, 1889-1914 will soon be published by Connor Court.