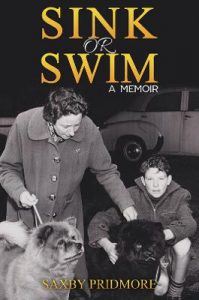 SINK OR SWIM A MEMOIR

Sink or Swim A Memoir by Saxby Pridmore AM is at times an eccentric read. At other moments it is piercingly descriptive with sentences those of a poet – short, unexpected and hitting their mark.

A professor of psychiatry at the University of Tasmania, along with qualifications in addiction, pain management, neurology and public health, Saxby Pridmore has also been a champion boxer and is a published poet. Like Saxby, his memoir is a bagful of separate parts.

Born at the end of the Second World War, Saxby Pridmore sketches an unusual childhood as the progeny of unusual parents. Mother Gwen was inclined to favour his older brother and lacked much of the expected mother’s warmth – she noted Saxby as a “lazy fellow” when his first tooth did not appear until the age of 10 months. Roughed up by older brother Walter H, unprotected in this by his parents, and on the move to different houses due to what his mother called his father’s “gipsy blood” – Adelaide mostly then Hobart – Saxby Pridmore is pushed up against a take-no-prisoners world in his first years.

There is no sentimentality in Saxby’s account of the world he grew into. But there is much balance and little recrimination in his account of, at times, the rough and ready rearing he received. After his parents’ attempts at raising chickens failed, his father Walter B was either out of work or in work he was forced to accept due to his lack of qualifications for anything better and money was scarce. The family lived in cheap housing where they could find it. Regardless, Walter B still managed to keep pedigree dogs and attend dog shows. As a result, Saxby Pridmore and his mother made the pages of The Advocate newspaper in 1958, along with their two chow-chows, as the family arrived back in Tasmania from South Australia. It makes a great photo for the book’s front cover.

This memoir is in many ways a tribute to an Australia long past. The book mostly covers Pridmore’s early life as a boy, student and eventually graduate physician and psychiatrist. It is the story of the self-made in a country where perseverance and application can bring rewards. Along the way, Pridmore gives compelling insights to some of the oddities he encountered.

Schooling is described as a mountain to be climbed and endured. Before he was six, Pridmore had attended three different schools. There was little sensitivity of the modern day kind to be had from either home or teacher – something those who lived as youngsters in that generation can well connect with – and getting on was what any individual child could make of it. For all that, Pridmore recalls his teachers positively for the times: “No doubt the harsh teachers described by Dickens in the nineteenth century had existed, but my twentieth century teachers were kind, almost without exception.” Corporal punishment ruled the day, especially for boys, although Pridmore suggests the reports of heavy-handed beatings and canings to be an exaggeration from his experience.

There are quaint and detailed descriptions in these school years of some of the more outmoded daily rituals. The use of pen and ink, with its traps for users – in an age of “penmanship” and rewards for clean and perfect writing, Pridmore writes:

You could be writing nice narrow upstrokes and fat downstrokes and then as you bring your hand back from the inkwell, a huge drop of ink releases from the back of your nib and smashes into a huge blue-black splosh on what you had just written.

Along with the tribulations of pen and ink was the daily, handed out and compulsory bottle of lukewarm milk, blackboard rituals, classes of 110 pupils, desks screwed to the floor, bullying for having an odd name and unapologetic labelling of pupils by size, their troublesome behaviour, gender and much more. In one chapter’s concluding sentence, Pridmore sums up his own less than average performance: “In second term I got five out of 20 for dictation but 13 in the third (last) term.” It would be a long haul to academic success for Saxby Pridmore. Even so, as the years – and house moves – wore on, Saxby and brother Walter H showed high intelligence enough to win places at Hobart High School.

Pridmore’s father, Walter B, had enjoyed privileged tuition at the Hutchins School in Hobart until his own father left and he was no longer able to finish his education. This left his family in straitened circumstances but with Walter B displaying a sense of being more intelligent than those around him. Pridmore’s description of places and homes the family lived in – on one occasion with aging and somewhat senile grandparents – leaves a picture of struggle against the odds in a world where props of government assistance were unknown.

At one point, Pridmore describes his father as “an intelligent man” but one who “lacked the personality features to make use of his intelligence”. In this home atmosphere of penury mixed with a father’s sense of superiority, the Pridmore boys were very much left to make their own way. As it turned out, it would be the younger Saxby who had the personality to make use of his intelligence. Older brother – Walter H – on the other hand, took the path of indulgence and addiction. In a confessional moment, Saxby writes: “I never loved my brother. When he was dying of cancer at 70 years of age, in another state – I didn’t go to visit him.”

There is an amusing self-deprecatory tone to Pridmore’s memoir – a life of hard knocks with cracks of light relief. His undoubted sporting prowess is sprinkled with injuries and even the win of a trophy coloured with guilt:

I had always wanted to win the Open HHS Cross Country (because the winner got a cup). … This came to pass, Roger was first home, I was second. But he wasn’t entered in the Open division, I was. So, I got the Open cup. I have apologised to him a number of times over the years, but I’m pleased to have the cup (if only on a technicality). (“I’m a second eleven sort of chap” – J. M. Barrie, died 1937.)

Years of sporting and other injuries may have convinced Pridmore that becoming an orthopaedic surgeon was his ultimate aim but with his final school results he needed to make a more circuitous route to that destiny. This found him studying physiotherapy with a bond in Melbourne. His account of those libertarian university years capture the rookie entry into adult rituals and a wiser lookback on where it all ended. In an amusing reflection, Pridmore stops boxing:

Looking back on the freedom and peace generation he likewise but more pointedly reflects:

Some of us had flowers appliqued on our jeans and most of us would respond in a fashionable manner to the greeting “Peace brother/sister”. To me, while promoting rule-breaking, the hippie culture promoted love and acceptance, similar in many ways to the stuff Billy Graham talked about, so, it could not be all that bad. We could not have expected to know that if “individual rights” continued to expand, eventually we would end up with a lot more greedy people and a lot less functional society.

It is in recording his years as a young doctor in Hobart that Pridmore reveals his interest developing in psychiatry and his growing expertise in the area of suicide and mental health. His observations are acute but not quite as acute as his account of giving the boot to an expat British surgeon who had joined the med team.

With a reputation for getting drunk and beating up junior staff, this surgeon also had a name for disreputable public behaviour – no doubt mostly while drunk. On one occasion he visited the home of Pridmore and his then wife Susan where he took over their phone to make very expensive, overseas calls. In the argument that ensued, Saxby landed him a punch causing a large gash over his eye. The surgeon then assaulted Susan which led to a real fight with the surgeon crashing into a glass fronted china cabinet and sustaining severe cuts to his buttocks. He was off surgery for a week and unable to sit down in his out-patient clinic. As Pridmore writes, revenge was sweet for the junior staff who took delight in asking him what had happened to which he did not reply.

There is, throughout, a serious side to this memoir. Saxby Pridmore writes of his own life as much as a memory hole as a look back on the meaning of behaviour. He finds some answers but seems still to be searching. As he writes: “In my first year of training I was challenged by the questions of what and what is not, the province of psychiatry. These remain unanswered. They get answered and then the goalposts are moved (again).”

Sink or Swim A Memoir is a quirky read, as well as one that stirs serious reflection. What we recall, how much we recall and how we are moulded by both our nurturing and our circumstances, alongside our personalities, fold into what we become. It is Saxby Pridmore’s achievement to present a canvas for all of us; one that entertains and recalls a lost world while pushing for fresh approaches.