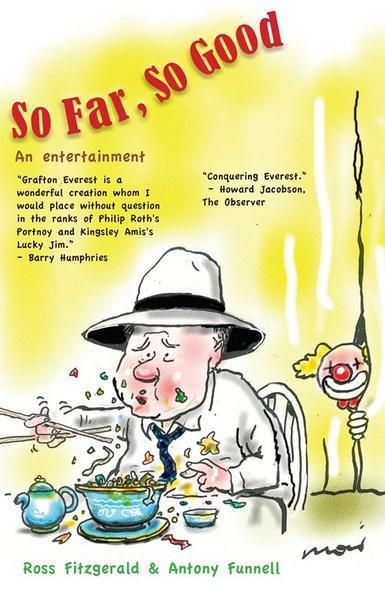 So Far, So Good

When I launched Ross Fitzgerald’s memoir My Name is Ross: An Alcoholic’s Journey in 2010, I commented that in early adulthood the author recognised that he suffered from three conditions. Namely, alcoholism, drug addiction and narcissism.  I reported the good news that, four decades later, the first two conditions are in remission.

So Far, So Good is the sixth adventure featuring Fitzgerald’s creation Dr Professor Grafton Everest – this one co-written with Anthony Funnell of ABC Radio National’s Future Tense fame. I do not know Funnell.  But Fitzgerald has assured me that So Far, So Good is a work of pure fiction.

Just as well.  Early in the book, Grafton’s wife Janet (presumably Janet Everest – but maybe not) tells her husband “Not everything is about you, my love”.  Later on, a certain Neal Prince lists the following as Grafton’s character traits – “indulgent, over-weight, selfish, conceited, stubborn, childish, narcissistic, gluttonous, lazy”.  Oh yes, and Everest is also a recovering alcoholic.

In the previous adventure in the series, titled Going Out Backwards (which was co-authored with Ian McFadyen), Everest found himself as the Independent Premier of Mangoland (read Queensland) and later holding the balance of power in the Senate before managing – in his clumsy way – to prevent the assassination of the prime minister.  And Everest doesn’t even drink alcohol.

The plot in So Far, So Good is equally bizarre.  Grafton manages to thwart an attempt by the secretive 1066 group to overthrow the British government and create a fascist style Kingdom of Normandy – with the help of Russia. As to the title So Far, So Good – well this is the reported comment of the owner of a Chinese restaurant to his customer before, after and during every course. That’s all.

You see, after his heady days in Mangoland and in the Australian Senate, Everest finds that the phone no longer rings and life is rather dull. However, the mysterious Lord Mandeville and his supporters in faraway Britain read Everest’s maiden speech in the Senate – where he focused on the cause of animal rights and urged all his fellow citizens to understand that the Australian coat of arms features an emu and a kangaroo and to reflect on the fact that it is animals that hold up the Australian shield.

It’s 2018. So it’s not surprising that Everest’s British admirers see clichés as profound thought.  So Everest’s comment (drafted by Neal Prince) that “Only an animal would be an animal to an animal!!!”  won wide praise.  Despite the fact that no one really knew what it meant – including Everest.  There is also widespread admiration for his equally banal saying: “Wherever you go, you take yourself with you; make haste slowly friends is my advice.”

Perhaps it’s because Everest has aged a bit since his last adventure.  However, for whatever reason, he’s more interested in food this time around – and less interested in sex.  For example, on one occasion Grafton reflects close to lunch that he hasn’t eaten since morning tea.

As readers of Going Out Backwards will be aware, sex between Everest and his missus is negotiated with reference to the washing cycle.  On a Saturday morning – she declares that she’s about to put on a load of washing and he gets excited at the prospect. This time around, however, there is no such happy ending.  Janet declares, after dinner mid-week, of her intention to put on a load of washing – but since she is only washing smalls, it will be a short cycle.  Alas, Everest is not up to the task due to the lack of adequate notice.

Later on, Grafton wonders before leaving London for New York about whether some washing needed to be done. Alas, Janet responds that she has already given a bundle of washing to the hotel laundry service and just washed his knickers in the basin.   Still, for Everest there’s always breakfast, lunch and dinner and much in between.  Which is more comforting for a man of his age than a cold shower followed by a run around the block.

Grafton Everest’s latest adventure has a big focus on new technology, especially artificial intelligence. This may, or may not, interest the Grafton Everest Fan Club. But, as with Going Out Backwards, the most amusing parts of Everest’s on-going adventures involve his interactions with his former employer, the University of Mangoland and similar institutions.

It turns out that the University of Mangoland has been renamed the Excitement University.  Everest travels from his home in Sydney (the abode which houses his only friend – the canine Maddie) to Brisbane where he meets the EU’s vice-chancellor and her staff.  It turns out that the university has demolished its lecture theatres and got rid of its lecturers and tutors – so as to reduce the fat between the administration and students.

Everest meets the man who has just been appointed by the vice-chancellor to the new position of DVC-PVC.  That is, Deputy Vice-Chancellor for all Pro Vice-Chancellors. He has already appointed forty PVCs to implement the EU’s “Flip Classroom” concept. This allows students to pick up information through online videos, blogs and other content-rich platforms and assimilate that knowledge through problem solving strategists and debates.  All is open-planned.  Except the offices of the PVCs who need confidentiality since they attend lots of meetings.  Everest asks “what is the failure rate? – and is told there is no failure rate, since the university’s performance is based on whether it meets the pre-purchased expectations of students.

Sounds familiar? Alas, yes.  Reviewing So Far, So Good in The Weekend Australian on 26-27 May 2018, Peter Pierce wrote that “unfortunately” the account of Australia’s tertiary institutions in the book amounts to “no exaggeration of the modern tertiary malaise”

There is more.  Much more.  Everest spends time with his about-to-be married daughter in New York. She’s not only in a I-want-to save-the-world-from-climate-change-disaster mode. She also is an advocate of clown rights.  While in New York, Everest addresses the United Nations – since he has just been appointed president of the republic of Australia.  Sounds crazy?  Sure – but your man Dr Professor Grafton Everest is more likely to achieve this position than the real life Peter FitzSimons, who reckons that Australians are likely to vote for a millionaire bloke from Neutral Bay – who wears a red rag on his head – to be our head of state.

Here’s hoping that Everest engages in another adventure – his seventh.  The Grafton Everest Fan Club hopes that the doctor/professor is capable of saving the world (once again) and that Mrs Everest sees value in putting on a few more loads of washing at the designated time.  Sure, Dr Professor Grafton Everest does not seem to be in the physical condition to reach a hundred years of age. But – so far, so good.

Gerard Henderson is Executive Director of The Sydney Institute and the author of Santamaria – A Most Unusual Man (MUP 2015).