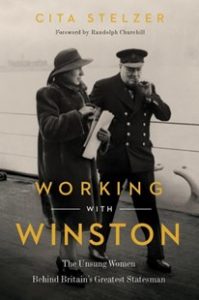 Working with Winston – The Unsung Women Behind Britain’s Greatest Statesman

They were called secretaries but their duties could range widely – from endless “taking down” (shorthand) until 3am to looking after fish or butterflies and various other species in the Churchill menagerie, or coping with a pet budgerigar loose in the prime ministerial car while typing dictation, to helping burn an official portrait in a sibling’s garden sanctioned by the great man himself.

As Randolph Churchill, Sir Winston Churchill’s great grandson, puts it in the Foreword to Cita Stelzer’s Working with Winston – The Unsung Women Behind Britain’s Greatest Statesman, “Many of these female secretaries and shorthand typists, although extraordinarily talented and invaluable to Churchill in enabling him to live and work a full life with as little friction and annoyance as possible, remain unheralded.”

Now, thanks to a vast collection of oral records in the archives at Churchill College, Cambridge and a handful of diaries and accounts from a few of these secretaries themselves, Cita Stelzer has written these women into some of the most momentous events of the 20th Century.

There are eleven women singled out alongside a male secretary who is included to somewhat contrast the ways in which, until the later years of the Second World War, female assistants and male assistants were unequally treated. Patrick Kinna was as hard working as any of the women, and a super fast steno typist, but his engagement by Churchill in 1941 was partly because it was deemed unsuitable to take female secretaries on some of the wartime sea voyages for high level meetings with the prime minister. This would change by 1944, when Churchill took Jo Sturdee, Kathleen Hill and Marian Holmes with him to the Quebec meeting in September.

For all that, a male secretary still had a small window of status not offered the females. Kinna, for example, would never be given such tasks as helping with the family menagerie.

The working life of Churchill’s female secretaries was extraordinary by any standards – especially those today. By faithfully recreating the recollections of each of her subjects – albeit some repetition dulls the read as many had similar tales to record – Stelzer offers a scenario of Churchill’s daily routine, and its highs and lows, that completes the now voluminous accounts of his story. Ironically, it seems that these women saw the real Churchill in ways others could only speculate on.

Many, both staff and colleagues, recorded that Churchill could be selfish and intolerant, but all of the women who worked as his secretaries acknowledged that he quickly made amends in various ways while never quite admitting he had been remiss. He could also be quite sentimental over the loss of a pet – crying even. This, his charm and the knowledge that they were doing important work for the nation kept them going. They were devoted to him.

Their endeavours covered not just Churchill’s political work but also voluminous work on his books – books that paid handsomely and kept the Churchill household afloat and comfortable over decades. As historian Andrew Roberts has confirmed, Churchill sold more history books than any other 20th Century historian.

Churchill expected a fully functioning office wherever it was. On trips abroad, it was his faithful female secretaries who packed duplicate papers and machines to keep them at work as if they had never left home. After all, Churchill had shipped his bathtub to the front in World War I when he was just a junior officer. What’s more, he expected his regular staff to be with him wherever he went – Grace Hamblin, who later became the first administrator at Chartwell after Churchill’s death, recorded that he regarded temporary or unknown staff as “intruders”.

Secretaries assigned to Churchill were expected to “take down” at any moment – Jane Portal recalled how he would summon a secretary with a bull roar of “Miss”. Whoever was on call would arrive at his bedside, his desk, his chair, his bath (outside the door) to “take down” his words – all to be typed up soon after.

Kathleen Hill (seen on the cover of the book taking notes on board the HMS Prince of Wales) recalled not only being his typist and dictation secretary but also managing accounts, overseeing literary works and managing film rights. There were also moments at Chartwell, while Churchill was doing his bricklaying, when she took phone calls then ran outside and climbed ladders to take down responses, then ran back to type them up. She typed in the car with frozen fingers. And, as typing machines improved, secretaries were expected to type as the great man spoke his lines, including on trains and in other vehicles.

The women who worked with this famous boss were often very young. Jo Sturdee celebrated her twenty-first birthday on board the ship taking them to the Quebec Conference in September 1944. Months later she was included in the trip to the Yalta meetings in February 1945, where on her own typewriter she recorded discussions that would shape the post war world.

At just 18, Cecily (Chips) Gemmell recalled being summoned to “take down” thoughts on a speech Churchill was preparing. Shaking, she took down his words only to be called out later for not getting “one word in fifty right”. As she put it, “This was something he’d spent a lot of time and energy on and to have it come out as gobbledygook was terrible to him.” He made up for it later by complimenting her on another task.

These secretaries played roles as part of the momentous history unfolding. Violet Pearman, who worked for Churchill from 1929 till 1938 after which illness forced her retirement, was with Churchill in the years he opposed his Conservative colleague and prime minister, Neville Chamberlain and the government’s policy of appeasement with Hitler. Pearman became a conduit for the data sent to Churchill from a squadron leader in the air arm, Torr Anderson. Work that Stelzer describes as “more than a robotic stenographer or keeper of the diary at work … a trusted co-conspirator providing her own interpretation of events, and soothing words for a nervous source”.

The familiarity that developed between boss and secretary never crossed personal friendship lines. Elizabeth Gilliatt recalled never having a discussion with him – although he might ask for an opinion on something. On trips abroad, and at embassies or High Commissions, getting an invitation to join an official dinner was a rare moment of achievement.

Churchill was as close in many ways to his secretaries as a member of his family – more so in lots of respects – but relations were distinctly master and servant. As it still is in Royal households where discretion is the ultimate prerequisite. As Jane Portal – the niece of Churchill’s colleague Rab Butler – put it: “He wasn’t interested in me and I didn’t expect him to be. I would have been horrified if he had been.”

Catherine Snelling, who worked with Churchill in his latter years until his death, wrote cheques for his jockeys who won and recalled his mercurial generosity. Marian Holmes recorded in her diary that Mrs Churchill’s conversations would range from elections to the best method of committing suicide. Lettice Marston in August 1949 at Beaverbrook’s La Caponicina witnessed Churchill unable to write his name (possibly a very minor stroke) although he recovered soon after.

There were occasional perks that could never make up for the long hours but they were treasured. Elizabeth Gilliatt and Lettice Marston were allowed to exercise Churchill’s famous horse, riding it in Knightsbridge, and in time all his secretaries were given two weeks annual leave.

However, Doreen Pugh found the leave still left burdens when the staff on duty had to cover the work of the one on leave. She recalled that Churchill would say it was a waste of time travelling with Lady Churchill because he couldn’t dictate to her. Pugh’s description of travelling with Churchill captures what all the secretaires endured:

The ongoing work had to be transported as well: “mountains of stuff went. As if we were going to a desert island or something”, Pugh remembers. There was so much paraphernalia for Churchill’s routine trips that one of the secretaries went in a second car with “maids, luggage, black boxes and the dog and the budgerigar  … Every black box in existence was packed with papers and tin trunks” – tin presumably so the papers would not get chewed, mildewed or drowned.

In all, Stelzer has captured an Edwardian world where staff dedicated their time at work to the master of the house. At Chartwell, staff were treated to movie nights where at the end of the movie they were expected to all stand as the Churchills left the room. If a secretary was asked to dine with her boss, he would dictate throughout the meal. Portal recalled that they took a mouthful when they could.

Secretaries lived on the Chartwell estate in cottages while they worked there, moving back and forth in the late hours in the dark. Gemmell, however, had to pay for her cottage accommodation when she worked weekends at Chartwell. But, as Portal put it, ”We always gave up everything willingly and quite rightly.”

They saw his vanity such as his tendency to read from his own work and then state, “He’s very good you know”. And the time Churchill watched Richard Burton playing Hamlet and recited the lines as Burton said them onstage putting the great actor off. And they saw his anger and despotic outbursts calling Gemmell a “bloody fool” when one of his paintings did not fit the frame she had ordered. And his rudeness in momentary put downs. Yet they gave their all for the common good. Some won MBEs and most were left generous “bonuses” in Churchill’s will.

For all that, as Cita Stelzer writes, Churchill was “simply spoiled”. And, in these stories of working with the great man, that self indulgence is writ large. Completing the portrait, however warts and all, of the 20th Century’s greatest Western leader.