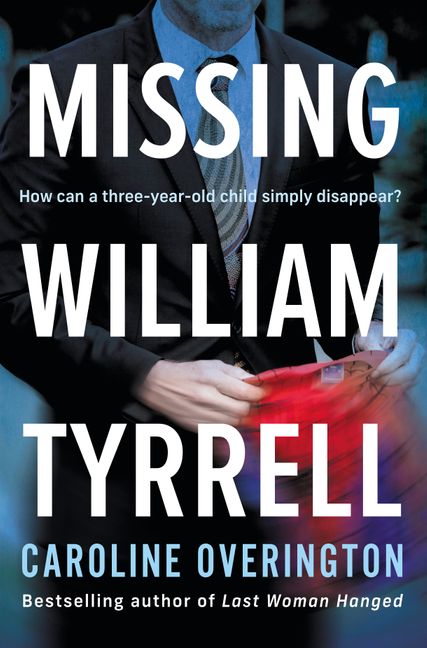 In popular crime fiction, the master detective pursues the clues, trusts instincts hewn over years of tracking the movements and signs in suspects and cracks the case after several mistaken scents. In a matter of weeks, even days, the case is solved. Another criminal is brought to justice. In the British crime series Vera, based on crime novels by writer Ann Cleeves, Detective Chief Inspector Vera Stanhope tells the irascible son of a victim, “I will find the answer if you give me the space to do my job – it’s a promise.”

In Caroline Overington’s real life crime account Missing William Tyrrell there is no such reassurance. Written with a page turner pace and sharply focussed on a chain of events as the search for three-year old William Tyrrell unfolds – from Friday 12 September 2014 until the coroner’s inquiry in 2020 – Overington leaves her reader ringside in a drama, albeit one with no answers.

For Australians long since catching information in the search for missing little William Tyrrell, there has been, over the years, a mismatch of information gleaned here and there from news reports. The whole story seems to have come piecemeal, with no clear idea of how such a tragedy could have taken place. There have been snippets about suspects from various families connected to this little lad – eventually revealed to be a foster child – trickling out. Not a lot of it making too much sense.

There were the biological parents, the foster parents who seemed to be more like the real parents, the biological nana and the foster nana from whose house William disappeared. There was, long since, news of a white goods repair man – he had been described as unreliable with connections to child abuse and his reputation was for some time thrown around as a local pariah simply because he was due to fix a washing machine at the home in New South Wales’ Kendall where William had been before he vanished. Names of suspects made their way into the public arena – possible pedophiles but none with possibility. There were mutterings about neighbours, white vans and sightings. Reading the news, it seemed a confusion. And it was.

For anyone who wants to get the facts in this case, Overington has as many of them as are relevant. Missing William Tyrrell gives as clear an account as can be given – all the important players credibly laid out – their ordeals, their part in the drama, their failings, their anger, their own tragedies as part of the search. The white goods repair local Bill Spedding would be interrogated, accused of old charges that had been legally declared unfounded, arrested and his business ruined before a witness eventually, after years, was able to prove Spedding was at a school assembly (where he always said he was) some miles away at the time William disappeared. A crack police officer Gary Jubelin would be desperate enough to record conversations with a Kendall neighbour on his mobile phone and find himself out of the force and before the courts where he received a substantial fine.

Nothing in all of this has brought us any closer to finding the missing William Tyrrell.

Perhaps the poignancy of this case lies in the photo of William Tyrrell just minutes before he vanished. He is wearing a Spider-Man suit and is open mouthed looking up and half smiling but roaring like a tiger. He is a beautiful three-year old, tiny limbs and neat brown hair. His foster mother was keeping a life book of photos and took the shot. Playing the tiger, William ran around the side of the house and before his foster mother could realise he was no longer to be heard – just minutes – he was gone. The house was surrounded on two sides by bushland, the front road passing its large block and a neighbour some distance away on the fourth side.

So many of the known facts did not seem to gel – doting foster parents, a safe house, a safe neighbourhood, no apparent strangers to be seen. Recollections of all the facts on the day of William’s disappearance are scattered and dysfunctional. The foster mother, distraught after the disappearance of her little boy, takes a day or so to recall two unfamiliar parked cars outside the property at the end of the cul-de-sac. Cars that could have been important to the investigation in the very early stages.

Suspicion in such events is part of police work but it is also a rough justice on those who fall in its path. An elderly neighbour, Paul Savage, was investigated and questioned as to why he searched the bush alone and not with the rest of the neighbours. Slight changes in his answers over the many months were rechecked as if he was lying. In fact, such was the ordinary nature of any day in Mr Savage’s life, mundane activities easily slipped into the mist.

Overington asked Savage, after years of being questioned by police if he thought he had been targeted. Savage replied: “…they started on Bill [Spedding] and kept on him until they couldn’t go anymore. When they was done with him, they turned their attention to me. You’ve got a lttle fella missing and they want to get somebody. But I had nothing to do with it. They messed up.”

But worst of all was the lack of forensic searching from the outset. A door-to-check of neighbours in this tiny settlement was made only of houses in a one kilometre radius. Ronald Chapman lived 1.7 kilometres away. No one knocked on his door even while his house is a minute’s drive from where William went missing. It took seven months for Chapman reveal that, around the time of William’s disappearance on Friday 12 September 2014, he had stood roadside at his house while watching a car speed past with a little boy standing at the rear window. The boy was wearing a spider man suit. Chapman was troubled by the manner of the woman’s dangerous driving and that the youngster was not in a seat belt. A second car sped past within seconds of the one with the little boy in it. It would be a thousand days before the police formally interviewed Ronald Chapman. Their suspicions immediately after the disappearance had been too focussed on Bill Spedding.

Chapman’s description of the blonde driving dangerously with the little boy in a black Camry would have an uncanny resemblance to another driver spotted coming into Kendall that day. And yet connections were never made.

Overington is not judgmental. The writing is crisp, factual and fast moving. Obviously, there were administrative reasons behind not revealing to the press for some years the fact that William was a foster child – information that might have helped in the investigation. The Department of Community and Family Services believed that to reveal this to the public would harm William on being found.

The uncomfortable reality is that nothing could harm William more than his not being found. Or his biological and foster parents. It now seems all to have been an error of judgment in the extreme and a reason the case became so hard to understand as it was reported. It also led to false accusations against the biological family along the way. They felt as if they were being blamed for William’s fate.

The end to this book comes much as its beginning – no William has been found. After more than five long years, the NSW State Coroner’s Court hearing has been conducted. As Overington reviews the hearing, her readers already have most of the facts to hand. They also have a feeling they now understand what a tragedy it has been for those involved, and their helplessness. Like another case in Australia’s history of missing children – the disappearance of the Beaumont children at Glenelg Beach in Adelaide in January 1966 – William Tyrrell’s disappearance seems destined to go unsolved.

And yet – from Overington again – here’s hoping there will be an answer. One day.