A LIFE WELL LIVED – AND ENJOYED

A LIFE WELL LIVED – AND ENJOYED 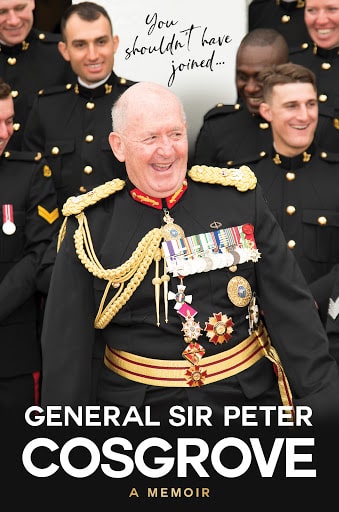 You Shouldn’t Have Joined: A Memoir by  Peter Cosgrove

“You shouldn’t have joined”  is an excellent autobiography by Sir Peter Cosgrove. It is well written, covers a variety of topics and deals with a number of people who crossed his path. Cosgrove points out early in the book that he has written previous books and does not want to go over this material again. Therefore, in the book he covers different events and stories in his early public life.

In the preface, Cosgrave says that his memoir is not about revealing unknown facts, insights and correcting the record. He says he is not a diarist, where the author has kept an account of every conversation and event. This is a relief as it differs from so many other autobiographies.

Cosgrove comes across as a humble man with no hang-ups. Early on, he says that “… service does not entitle ceremony”. In other words, just do what you are expected to do.  He also displays his sense of humour in several ways. Rightly, he is very proud of what he has achieved, such as receiving the Military Cross in 1971. He also shows empathy to other people, especially when unpleasant events occurred either in Australia or overseas.

One topic Cosgrove writes about in detail is “combat” in military battles.  He explains the importance of field craft if troops are to be successful. He outlines in graphic detail how the Vietnam War was fought, especially when the enemy was literally only a few metres away. He writes about strategies, jungle ambush and tactics. Cosgrove shows great compassion for the troops, many of whom must have suffered from post-traumatic stress disorder as a result of fighting in these conditions.

The author does not shy away from some of the things that happened while he trained at the Royal Military College, Duntroon in the ACT. The conditions were rough and ready, especially for first year trainees. This was widely known as “bastardisation” and had been going on for decades. Cosgrave admits he was on the receiving – and later on the giving – end of these puerile traditions. He admits it was “… damaging to an individual’s self-esteem”. Many years later when he returned to Duntroon, thankfully, these rituals had stopped.

Peter Cosgrove was thrown into the public arena when violence broke out in East Timor after the people voted in favour of independence from Indonesia. The United Nations sent in a peacekeeping force from Australia in 1999 under his leadership.  The Australian involvement in East Timor was excellent, and six months after entry, the job by the Australian troops was successfully completed and most of the troops could return home. Thereafter, Cosgrove was looked on as a hero.

After leaving Duntroon, Cosgrove made a very rapid rise up the military ranks. In quick succession, he joined the Royal Australian Army, spent two years in Malaysia and a term in Vietnam. “[A]fter which I realised I had grown up,” he muses.

Cosgrove won the Military Cross for his leadership in Vietnam. He then became Aide de Camp to then Governor-General Sir Paul Hasluck. He kept gaining promotions until he reached the top as Chief of the Defence Force. Despite his rapid rise in army ranks, he writes that he was disappointed when at first he did not become either a brigadier or later a major general. Given that he was being promoted at a pace considerably more than most other soldiers, obviously he was very ambitious.

Cosgrove retired from the Australian Defence Force in 2005. In no time, he entered the corporate world with a place on the board at Qantas. Although this was a new world for him, he enjoyed the work, watching the way leaders handled matters and how trade unions and corporations handled disputes and lockouts. He also joined the boards of other companies. Sir Peter was in constant demand. For example, he was asked to lead the recovery task force after Cyclone Larry in far north Queensland. He wanted to work closely with Premier Peter Beattie.

There are places in this book where Cosgrave comes across as a very confident person, perhaps over confident. In other places he seems quite different, as when he said to Beattie about himself, “[W]hat was needed were the ears of the leader more frequently than the mouth.”

In October 2013, then Prime Minister Tony Abbott asked Peter Cosgrove to become Australia’s Governor-General. Speaking for himself and his wife, Cosgrove says he “saw it as the greatest honour of our lives”. Given his background, the appointment came as no surprise. Cosgrove’s outstanding role in the armed forces in Australia, his performance in East Timor, the respect he had in the Asian-Pacific region and his experience in the corporate world were all in his favour.

After he was appointed Governor-General, but before he took over the job, Cosgrove wisely consulted previous governors-general for advice. He stayed in the role until 2019. Understandably, several chapters of his autobiography are devoted to his five or so years in this position.

Although there were many aspects to his role, Cosgrove is careful to sometimes write in generalities. This is noticed when he discusses dealings he had with the three prime ministers – Tony Abbott, Malcolm Turnbull and Scott Morrison. Cosgrove says his role was “… to be consulted, to encourage and to warn” prime ministers. The examples he gives for these roles are, as to be expected, vague in the extreme. In another example, he says that governors-general and prime ministers “… are not friends but it is desirable that they be friendly.”

Most people see a governor-general at functions, on television, at ceremonies and important events, usually in smart attire. This, however, is only a part of his or her responsibilities. Therefore, it is very important for people to know about the roles of the governor-general as laid out in the Constitution. Cosgrove covers these at length, while not getting too caught up in details.

Time consuming jobs undertaken by governors-general include giving royal assent (approval) to all legislation that passes through the  parliament before it becomes an Act. This is called the Executive Council, made up of the governor-general and a couple of ministers. In his time, there were 760 Acts. Governors-general swear in ministers, including the prime minister, as well as approving the date for a federal election. Sir Peter and Lady Cosgrove attended over 4000 functions.

There were many overseas visits, where Cosgrove represented Australia abroad. He visited the Australian troops in Iraq and Afghanistan, visiting over 40 countries and was the first Australian governor-general to visit Latin America. He especially enjoyed going to the Pacific Islands.

Cosgrove devotes a whole chapter to his contacts with the British Royal Family. He details these meetings even going to the extent of telling the reader whom he sat next to a Buckingham Palace function. It is not surprising, therefore, that Peter Cosgrove does not support Australia becoming a republic.

While many politicians have written autobiographies, few governors-general have done so. Sir Peter Cosgrove’s book is an easy read that covers the importance and interests of events in which he was involved.