LIGHT AND DARK – FRANCE AND THE FRENCH UNCOVERED

LIGHT AND DARK – FRANCE AND THE FRENCH UNCOVERED 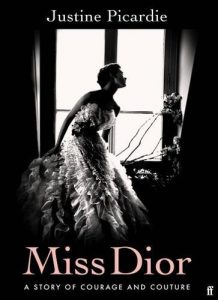 MISS DIOR A STORY OF COURAGE AND COUTURE

Justine Picardie opens her Miss Dior A Story of Courage and Couture with the words: “This is the story of a ghost who walked into my life on a sunlit morning in early summer, and would not let go of me.” Picardie was visiting the former house of Christian Dior, now a museum, La Colle Noire in the south of France. Ironically, there are many ghosts to lay to rest in the story that follows.

Beautifully presented, Picardie’s Miss Dior is a work of fine historical scholarship which captures a broad picture of Vichy France, its terrors – both Germanic and Francophile – and, by way of contrast, a French world – post war – of art and imagination that continues to attract global fascination. Two lead characters are the spine to bring this together – Catherine Dior and her far better known brother, couturier Christian Dior.

The Dior children on the coast of Normandy at Granville in the early twentieth century grew up in prosperous and secure surroundings with their mother’s “romantic, sweeping gowns of the period” inspiring her son’s creations much later. All this would change with the stock market crash of 1929, their father’s bankruptcy and their mother’s death in 1931. Christian and Catherine, twelve years younger, lived together in Paris and found work there.  As the Nazis took over northern France in 1940, however, Christian and Catherine, with their father, were in the south of France, north of Cannes in Callian. It is from here that Picardie’s canvas will move to darker territory.

In late 1941, Christian Dior moved back to Paris to find work. His life there as a couturier was risky but he managed to avoid both collaboration and any part in the resistance. His sister, meanwhile, in the south, became involved with the handsome Herve des Charbonneries who was a major player in the F2 resistance network. Catherine soon became part of F2. There would be times before her arrest that she sheltered with Christian in his Paris apartment.

Yet, this is not simply a biography Catherine Dior and her brother Christian. The book soon widens out to a landscape to be found in the Parisian circles of Nazi France. Well known figures litter the social scene – many very happy to mix with their Nazi rulers.  Marie-Louise Bousquet, influential Paris correspondent for Harper’s Bazaar, held regular salon entertainments with Nazi leaders her frequent guests. As Picardie writes, “another of Marie-Louise Bousquet’s regular guests Jean Cocteau, a self-professed pacifist and intermittent opium addict, seemed happy to socialise with Otto Abetz [German Ambassador to France].” Other guests included Pablo Picasso. As the Nazis moved to rounding up and deporting French Jewish citizens, Picardie connects this socialite collaboration to the acts of horror carried out under the occupation.

There are many ghosts that remain at the heart of French collaboration with the Germans in occupied France and Picardie lays them bare. In doing so, she quotes from writer David Pryce-Jones’ seminal work Paris in The Third Reich: ”If someone was ready to sell supplies illicitly, what stopped him from selling his compatriots? Desire for money imperceptibly shaded into treason.” And there are the silent who turned away. Picardie admits this in the case of Christian Dior, but lightly, writing:

Did the sight of the yellow stars and the cries of the children reach as far as Christian Dior’s apartment on Rue Royale? Certainly, Pierre Balmain describes how, whenever he and Christian saw the Germans marching down the Champs-Elysees, they turned away: “with sickness in our hearts [we] became ostensibly absorbed in a window display.”

With Catherine’s arrest in early July 1944 in Paris, the underground torture of spies and resistance comes into play. Beatings and ice water sessions, along with much other gruesome mistreatment were the order of the day. That so many women and men were able to maintain their loyalty to colleagues, in spite of this, begs the question of just how divided the French were. Such courage and daring in some with weakness and collaboration in others. Picardie traverses ground written about by others, but it is the detail and personal story that combines here to offer readers a lot more.

Hell holes like Fresnes prison on the outskirts of Paris to the notorious Ravensbruck concentration camp in Germany are drawn in sharp relief. The inmates’ lives were bare and cruel but the collegiality among the women at Ravensbruck persisted in a multitude of ways. While many perished under Hitler’s decree that spies should disappear in a “Night and Fog”, the artwork made from tiny scraps whether paper or thread become illustrations in Miss Dior, taking their place alongside the high quality designs of the couturier world “Dior” later became. It is a parallel of contrasts that is a striking metaphor of the French during and after the war.

Catherine was among those who survived their incarceration at Ravensbruck and staggered into the freed world still wearing the rags of their concentration camp. She arrived in Paris by train at the end of May 1945 to be met by Christian who did not recognise her, “such was her emaciation”. Janet Flanner for The New Yorker wrote of those arriving back: “In a way, all the women looked alike: their faces were gray-green, with reddish brown circles around their eyes, which seemed to see but not take in. They were dressed like scarecrows, in what had been given them at camp, clothes taken from the dead of all nationalities.” Christian took Catherine back to his apartment for a celebratory dinner but she was too sick to eat it.

With liberation and the end of the war, Picardie continues the tale with the House of Dior taking centre stage. While so much of Europe moved to peace times and began the heroic task of rebuilding, the victors also began the work of bringing the perpetrators to justice. Some paid the price – from prostitutes to businessmen. Many did not. For others, like Catherine Dior, they could give accounts of their tribulations for inquests and trials, but life needed to go on. On a day when Catherine gave evidence of her incarceration to authorities, her brother Christian was opening the showing of a new collection. In time, he would take his collections to Germany while his sister would refuse to set foot there ever again and “could not bear to hear German voices and the sight of cars bearing German number plates on the roads in France would make her angry and upset”.  Picardie writes of Catherine:

Her innate modesty and quiet discretion were clad in the silence that surrounded her wartime suffering; her face still showed the sadness and pain that she had endured, and her body bore the scars of her torture and punishing imprisonment. Instead, Catherine would become associated with the scent of Miss Dior perfume launched at the same time as the couture brand.

Thus, Picardie tells the story of the House of Dior, replete with wonderful plates of illustrations, sensual designs and its new mode fashion an antidote after the war years. But not only did Christian Dior rise from the ashes – the punishment of collaborators offered some recompense for those who braved resistance of their captors.

By following the two worlds of Christian Dior and his sister, Picardie traverses the post war world and its contradictions. Dior’s clients had money to splurge while most of Europe was on its knees. The homeless Duke of Windsor, back in Paris by 1945 and at a loss for things to do, downloaded his boredom to a dinner guest, saying:

I had planned to take a walk, but it was so cold I could hardly bear it … everyone I saw looked green with cold and their coats were so shabby that I became overcome with depression, in fact I saw one fellow who had no socks on and his ankles were blue, and I thought, “What would happen to me if I didn’t have my fur-lined slippers?

In an ironic twist, the House of Dior would become the creator of outfits not only for the Duchess of Windsor, who with her Duke had collaborated with various Nazi contacts in the early war years, but also Princess Margaret. Picardie notes that Princess Margaret is the only one of Dior’s clients identified by name in his memoir.

Catherine Dior made a successful life after her torrid war years. She continued the family’s interest in gardens and with Herve des Charbonneries established a successful flower business. She outlived her brother by five decades and her life would have gone unsung had her ghost not nagged at Justine Picardie as she visited Christian Dior’s fabulous home museum of La Colle Noire.

Justine Picardie takes her reader on a unique journey. In doing so, she captures much of the French spirit, its contradictions, its aspirations, its weaknesses, its horrors. It is a story of time and moment and particular personalities – and unlikely to occur again.