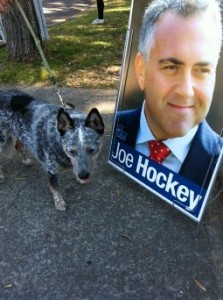 Nancy voted late on Saturday 7 September when only Joe Hockey was visible at the polling booth.  After a heavy Saturday night which continued into Sunday night, Nancy rose early this morning.  And – lo and behold – she woke up with what Jonathan Swift used to call a modest proposal.  Here it is – inspired by “The (2007) Thought of Jon Faine”, presenter of Mornings with Jon Faine on ABC Melbourne Radio 774.

Following Kevin Rudd’s defeat of John Howard in November 2007, Jon Faine called for a “cleansing process” of conservative commentators.  During a discussion with Bruce Guthrie (then editor-in-chief of the Herald-Sun) on 5 February 2008, Mr Faine suggested that the columns by the likes of Janet Albrechtsen “represent the thinking that’s out of step with the result of the election”. And he suggested that a “cleansing process” would be a good idea to replace Dr Albrechtsen and her ilk.

It is noteworthy that when John Howard defeated Paul Keating in March 1996, Jon Faine did not say that the likes of Kerry O’Brien and Phillip Adams were now out of step with the result of the election and that they should be subjected to a cleansing process.  Not at all.  Mr Faine then seemed to hold the view that conservative commentators should be replaced after Labor victories but leftist commentators should not be replaced after Coalition victories.  It’s called logic, ABC style.

It remains to be seen whether Jon Faine will revise his position after Saturday’s election. Especially since his employer, the ABC, does not have one conservative presenter or producer or editor for any of its main television or radio or on-line products.

Does Jon Faine hold the view that the cluster of leftist and left-of-centre commentators at the taxpayer funded public broadcaster now represent “the thinking that’s out of step with the result of the election?”  And, if so, will he support a “cleansing process” which might lead to the replacement of such ABC leftist identities as Phillip Adams, Fran (“I’m an activist” Kelly), Russell (“Tony Abbott is a shameless opportunist”) Skelton, Waleed Aly, Linda Mottram, Chip Rolley, Jonathan (“When I say we I mean Labor”) Green and more besides?  Perhaps even Mr Faine himself.

For the record, MWD itself is not calling for a purge.  But the ABC, currently a Conservative-Free-Zone, would be more in touch with the result of the 2013 election if it appointed one conservative to a prominent television or radio or online position.  Just one would be a good start.

What does Jon Faine think about this?  If a message arrives at Nancy’s kennel from Jon Faine or nice Mr Scott, MWD  will let you know on Friday.  After lunch, of course.