SEARCHING FOR ANSWERS – PREMIER ASKIN AND THOSE ALLEGATIONS

SEARCHING FOR ANSWERS – PREMIER ASKIN AND THOSE ALLEGATIONS 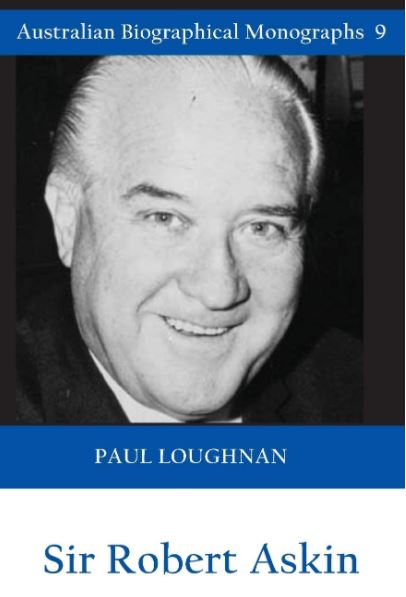 No biography of Bob Askin has ever been published or, as far as I am aware, attempted. This is odd given that Askin is certainly the most controversial NSW premier since Jack Lang.

For an account of Askin’s political life we have had to rely on scraps, such as the excellent summary by Ian Hancock in his chapter in The Premiers of New South Wales, Volume 2 (Federation Press 2006), edited by David Clune and Ken Turner; Norman Abjorensen’s Leadership and Liberal Revival: Bolte, Askin and the Post-war Ascendancy (Australian Scholarly Publishing 2008) and Murray Goot’s entry in the Australian Dictionary of Biography (ADB).

The arrival of a new monograph, Sir Robert Askin by Paul Loughnan, was therefore a cause for anticipation. This is the ninth in the publisher’s Australian Biographical Monographs series, which includes Neville Wran by David Clune, published in early 2020.

Hopes for a deeper exploration of Askin’s life, particularly his first 40 years before entering the NSW Parliament, were soon dashed. These years occupy only six pages of Loughnan’s monograph and add nothing to the details supplied by Hancock. Indeed, Loughnan appears to have relied heavily on Hancock’s work.

The monograph’s title is misleading. A more appropriate title would have been “Sir Robert Askin: Not Guilty”. Of the 78 pages of actual text, 46 pages (nearly 60 per cent) are devoted to what Loughnan calls, in a sub-heading, “The Askin Corruption Myth”. While a forensic examination of the corruption allegations made against Askin is long overdue, regrettably Loughnan has not supplied this. Loughnan’s examination of the corruption charges against Askin seem to have been largely predetermined by this sub-heading.

Loughnan writes, in his introduction, that it “will be clearly demonstrated that the Askin corruption myth was based on unsubstantiated and uncorroborated allegations”. That has never been in dispute. For Loughnan to be able to assert the corruption allegations are a “myth”, he needed to dismantle and discredit the actual allegations themselves. Loughnan does a reasonable job of casting doubts upon them but he fails to prove they are a myth.

Of all the scuttlebutt surrounding Askin – meaningless in a state where scuttlebutt is a currency – the two most persistent charges are those made by the National Times newspaper. The first, in an article by David Hickie on 14 September 1981, alleged that Askin and police commissioner, Fred Hanson, were each paid $100,000 a year by illegal casino operators from early in Askin’s premiership until his retirement in 1975. The second, published two weeks later in a joint article by David Hickie and Marian Wilkinson, alleged a group of bookmakers had collected $55,000 for him as a “going away gift” to “make certain the turnover tax would not be increased”.

Loughnan hardly touches on the second allegation which I have always found the most unlikely. Askin had announced his retirement when this “gift” was supposedly made. He was no longer able to influence government taxation policy. Indeed, Tom Lewis (Askin’s preferred successor) immediately doubled the turnover tax to 2 per cent and this became an issue in the subsequent NSW election campaign in 1976. Neville Wran, to fulfil an election promise, decreased the tax to 1.25 per cent in the Labor government’s first budget.

Incidentally, the ADB entry on Askin is in error in stating the payment from bookmakers to Askin was “a reward for his not doubling turnover tax”. This might make more sense but it differs from the original claim that the payment was to ensure the tax was not increased.

If this claim is true, and it was a retirement gift, it is not necessarily evidence of corruption although it would hopefully today be considered morally dubious. It has been variously reported, most recently in The Sydney Morning Herald on 9 December 2015, that a group of businessmen chipped in to help buy Sir Robert Menzies a house in Melbourne after his retirement. Interestingly, the Herald did not make much of this claim; it was buried well down in a favourable article on Menzies. This is also mentioned by Troy Bramston in his recent biography, Robert Menzies; the art of politics (Scribe 2019), again without any suggestion of impropriety.

The major allegation against Askin is the claim he received regular annual payments from Perce Galea, a major illegal casino operator, “to allow [his] illegal casino to operate uninterrupted”. It has never been clear whether this payment was for the purpose of preventing police action to close the casinos or a bribe to legalise them. These casinos operated in NSW, admittedly on a less sophisticated scale, during most of the long period of Labor rule which preceded Askin’s election in 1965 and continued to flourish under the Lewis, Willis, Wran, Unsworth and Greiner governments.

Askin was a dedicated punter and a former SP bookmaker. Of the score of premiers in these decades, he was the one most likely to personally tolerate this activity. Why would a casino operator have thought it necessary to pay protection money to Askin to stay in business if such payments were not considered necessary before or after him?

The payments, if made, were more likely to have been a bribe to encourage the legalisation of casinos. If so, they were spectacularly in vain. At no stage during the nearly ten years of Askin’s premiership was there a serious attempt at legalisation. The conservative nature of the Liberal Party, in coalition with an even more conservative Country Party, meant that was always a proverbial long shot. Perce Galea, if the payments were to encourage legalisation, must be considered a “mug punter”.

Loughnan performs a useful task in rounding up those who reject the allegations against Askin. These include a former NSW Governor, Sir Rodin Cutler, Askin’s long-standing press secretary and his driver, and Justice Athol Moffitt, who conducted at Askin’s request, a royal commission into allegations of organised crime in clubs. Such references are important but none, with perhaps the exception of Moffitt, were in a position to shed light on whether such payments were made or received.

Loughnan recounts that David Hickie agreed to an interview but, despite a subheading titled “Hickie’s evidence”, he reports nothing of what Hickie told him other than the interesting claim that Hickie had discarded “almost all of his ‘24 filing cabinets’ of material on Askin”. (Having worked closely with Hickie at The Sydney Morning Herald in the 1990s and having found him one of the most anal-retentive persons I have known, I have my doubts about this).

Loughnan dismisses “Hickie’s evidence” as “based on hearsay, innuendo and anonymous accusations”. It is odd that Loughnan does not balance this with the conclusion of Ian Hancock: “Hickie’s sources, named or otherwise identified in confidential correspondence with the author, are too well placed to be dismissed.”

On occasions Loughnan resorts to “playing the man”. Hickie is variously described as “a young law student and gardener”, “a young journalist”, “a student at the time” and “impressionable”. Loughnan also writes that “it is noteworthy” that David Marr, the editor of the National Times when the Hickie articles were published, “has not held a position as editor since the Askin debacle”. Marr, a gifted writer, would not be the first newspaper journalist to discover that an editor position is one of the most demanding and frustrating jobs in journalism.

Loughnan’s assembly of most of the arguments for the defence of Askin is a welcome balance but he falls well short of demonstrating that the corruption allegations are “just not true”, as the monograph’s editor claims.

Ultimately Loughnan falls back on sweeping assertions, such as: “It defies logic and fails the ‘pub test’”; and “Askin had no children to benefit from his wealth and he desired no ostentatious status symbols such as mansions, cars, or holiday homes.” These assertions are insufficient to explain away the substantial size of Askin’s estate in 1981 of $8.5 million (measured in today’s dollars) or that of his wife Mollie in 1985 of $11.5 million (also in today’s dollars).

Loughnan reveals that the bulk of Mollie Askin’s estate, after some bequests to friends, relatives and charities (and allegedly a payment to the ATO), was invested in several charitable trusts. Over the years millions of dollars have been distributed to NSW hospitals, for cultural purposes and for animal welfare. It must be some consolation to those who are convinced of Askin’s guilt to know that among the beneficiaries of his ill-gotten gains have been some of the very people he was elected to serve.

The effluxion of time probably means no definitive judgment can ever be made about the truth or otherwise of Askin’s corruption. At this time, the only proper conclusion is that the allegations are “not proven”, to adopt the Scottish verdict.

This was also the conclusion of Michael Duffy and Nick Hordern in the chapter on Askin in Sydney Noir: The Golden Years (NewSouth 2017). The authors drew heavily on Loughnan’s PhD thesis, which forms the basis of his monograph. Interestingly they give reasons why they do not regard the size of the Askins’ estates as prima facie evidence of corruption.

Duffy and Hordern found there was insufficient evidence to make a judgment and concluded the issue of whether Askin was corrupt was an “open question”. This remains the most sensible conclusion and Loughnan has provided no reason to dispute this.

Finally, the publisher has diminished the monograph by permitting a bizarre “Epilogue” which amounts to a juvenile and irrelevant attack by Loughnan on David Marr. This epilogue has no place in a serious biographical monograph series.

Milton Cockburn is the former executive director of the Shopping Centre Council of Australia, and a former editor of The Sydney Morning Herald.