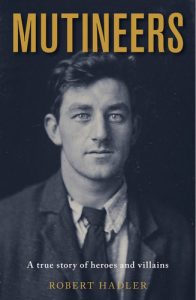 Mutineers – A true story of heroes and villains by Robert Hadler

The author wrote his first book, entitled Dark Secrets, which was published in 2020. Mutineers was published a year later. Both books are about interesting events in the Royal Australian Navy (RAN), one in World War II and this book in World War I. Both follow a similar pattern of events: a crime, some people are accused and punished, accusations of wrongful punishment, followed by a reversed decision. Both books are of a high quality.

Mutineers is set around events that occurred on the Australia which was the flagship of the RAN in WWI. Although the RAN was formed in 1911, its ships were under the control of the Royal Navy (RN) of Great Britain for the duration of WWI.

There were many problems with the Australian Navy at this time. The flagship had problems during WWI, one of which was that it saw little action during the war. It missed most of the major naval battles, such as the Battle of Jutland, either because it was elsewhere patrolling or it was in dry dock for repairs. Consequently, the sailors were restless and bored. It is little wonder they got into trouble.

The author outlines other reasons why most of the sailors on this ship were on edge. These included poor food, atrocious weather, censoring of their mail, monotony, privileges for the officers and a tightening up of discipline. In particular, there was a strong dislike, even contempt, for the British officers. For example, sometimes when the ship birthed only the officers were allowed to go ashore. (These feelings towards British officers were similarly felt by many of the Australian soldiers.) On the Australia it seemed most of these problems were not addressed.

This book is about the lives of five young Australian sailors before, during and after WWI. All of them were very young when they joined the Navy and they all spent some time on the Australia. Hadler gives a detailed account of their journeys during these years. The leader of this group – and the one who gets the most attention in the book – was Dal Rudd. The author noted that a majority of the five  “… had chequered disciplinary records” before they went on board the Australia. This continued when they were on the flagship.

An important event took place early in 1918, when the British Navy decided to blockade the canal in Belgium where certain German submarines were based. A few Australians, including Dal Rudd, were asked to join this attack. The raid had little success, and it included hand to hand fighting with the German sailors. Dal Rudd’s role and bravery were noted such that he received a Distinguished Service Award at the end of the war. This bravery was later used as a reason Dal Rudd should not be put into prison after the war.

Throughout the book, Robert Hadler describes in detail the relief felt by a huge number of people when Germany surrendered to end the war in late 1918, and also the ceremonies that followed. He also gives an interesting picture about what was happening in Dale’s private life when the Australia spent time in England after the war.

After some considerable time, the ship was ready to return to Australia. To celebrate the WWI victory it was decided the flagship, Australia, should dock at Fremantle, Adelaide, Melbourne and Sydney. This is where the trouble started and about which the book is concerned. The ship was under new leadership, Commodore John Dumaresq, an Englishman, and Captain Claude Cumberlege, an Australian. The author gives a thorough and interesting account of the celebrations and functions that took place at each city, despite the devastating Spanish Flu.

The five men, along with many others, got involved in an incident on board the Australia when it docked at Fremantle. It was seen as a “mutiny” by some, for which the leaders, including Dal Rudd, his brother and three others should be severely punished.

At Fremantle, the crew was allowed to go ashore and return on the Saturday evening, despite the fact that the ship was leaving for Fremantle the next morning. Whoever made this decision seems to have made a mistake, as the sailors wanted to have people on board on the Sunday to return their hospitality, thereby leaving a day later.

Hadler gives a comprehensive summary of what happened next. The decision by the officers in charge was made and the sailors did not get their way of staying an extra day. The sailors decided instead to stop stoking coal in the boiler room, hence stopping the ship. Many sailors and officers were later interviewed and the Australia was restarted. Commodore Dumaresq took a hard line that the action by the sailors was a mutiny and the five leaders should be placed in the ship’s jail until it reached its final destination in Sydney. Captain Cumberlege was more inclined to call the incident a “strike”, but he did not get his way. This is another example of British and Australian officers seeing things differently.

When the ship reached Sydney a court martial was held. This raised the ire of groups in Australia. And the charges were downgraded, due to political pressure and the urging from Captain Cumberlege. Despite this, the men were found guilty and sentenced to terms of between one and two years, with Bill McIntosh and Lenny Rudd (Dal’s brother) getting the longest sentences of two years, since they were judged to be the leaders of the Fremantle incident.

The author gives a summary of how the media, trade unions and the political parties reacted. Sections of the Labor Party, in opposition at the time, were particularly vocal in what they saw as unjust sentences. Labor was very strong, emphasising the “harsh British discipline” and Britain’s control of the Australian Navy. The Nationalist Party, in government at the time, was in a bind because the next federal election was not far away. In addition, the party was divided on the issue, and two of its key leaders Billy Hughes (Prime Minister) and Joseph Cook (Minister for the Navy) were still in London. Even the Governor-General got involved. Dumaresq remained firm that the reduced sentence was just.

When Hughes and Cook returned from overseas they quickly realised the problems and pressured the relevant people, including the Australian Commonwealth Naval Board and others, to change their stance and support the release of the sailors.  At last, just prior to Christmas, the five men were released from prison. Dumaresq remained convinced that important matters, which were under discussion, were leaked by to the Australian press.

Towards the end of the book, Hadler discusses how all these events must have affected the five men. Some senior figures such as Dumaresq and Rear Admiral Percy Grant – Chief of the Australian Naval Staff – must also have felt that they were let down. Captain Cumberlege was promoted.

In conclusion, Hadler says correctly that “… the Australia mutiny in 1918 was a missed opportunity to fix the issues facing the sailors below deck”. Captain Cumberlege summed up the event much later when he said “… I shall always regard the whole episode as being no more than a sort of schoolboy escapade”. Unfortunately, the British High Command did not see it that way.

This book clearly shows once again the author’s passion about Australian history. He presents Mutineers in a very thorough and skilful way.