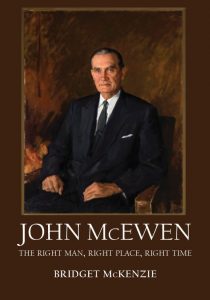 John McEwen wrote an autobiography after he retired, but there have been few books written about him. One of those is the book by Victorian Nationals Senator Bridget McKenzie published in 2020. It is surprising because he is the third longest serving leader of the Nationals (originally the Country Party), behind Earle Page and Arthur Fadden, since the party’s inception in 1920. McEwen was either leader or deputy leader of the party from 1943 to 1971, a total of 28 years which is remarkable.

Although John McEwen: The Right Man, Right Place, Right Time is, by design, a brief book – the author has given a lot of insights into McEwen. McKenzie acknowledges the biography is not a chronological history of her subject.  Except for the cover, which is a photo of McEwen’s portrait in Parliament House, Canberra, there are no photos. However, there are cartoons – some of which could have done with a greater explanation of what is being discussed but are interesting all the same.

McKenzie, says McEwen, played an important “role in four of the most significant developments in Australian political history”, yet she elected not to write about them at length. They were the founding of the United Nations, how McEwen stood up to the United States of America over wool trade in the early 1950s, his views in a White Paper on Aboriginal Australians and how he helped to dismantle the White Australia Policy. Why did she do this?

These accounts would have been interesting and could have replaced some of the large number of pages devoted to both the McEwen/Holt incident (when the Country Party leader blocked William McMahon succeeding Harold Holt as prime minister when the latter drowned in 1967), which many readers would know about, and to the  events in New Caledonia in the 1940s (when Australia ensured that the Free French, not the pro-Nazi Vichy French, took control of the French Pacific territory which ensured it as allied territory).

McKenzie gives a glowing account of McEwen’s role in government. She looks at six themes of his life. Despite his dislike of Japan during the war, he was also pragmatic about that country. One of his greatest achievements was the trade treaty signed with Japan in 1957. Despite the fact that many politicians were sceptical about this treaty, McEwen was correct, as Japan became our closest trading partner for many years.

He played a big part in the Kennedy Round, which was a major trading conferences in the 1960s. He had many critics, but he saw that his main objective was to increase jobs and population. The author notes that McEwen played a major role in bringing immigrants to Australia, but fails to mention the role played by people such as Arthur Calwell when minister for immigration after the Second World War. This theme, that McEwen achieved so much on his own, is frequently evident throughout the book, although the author pays tribute to his two departmental secretaries, John Crawford and Alan Westerman.

McKenzie stressed on several occasions McEwen’s love of country life. “He took these places” he liked – such as Chiltern, Stanhope and Wangaratta – “to Canberra and eventually the world”.  He never lost his roots. For example, McEwen pleaded hard to get a better deal for the soldier settlers after World War One. Several of the people the author interviewed also stated that McEwen never forgot his country beginnings.

The chapter entitled “Party” consists of about 16 pages.  We learn that McEwen won a federal seat in 1934 during the time of the Joseph Lyons led United Australia Party government. The name of the seat is not mentioned until much later in the book.  The first third of the chapter reveals the origins of the Country Party. McEwen obtained a position in the Lyons ministry in 1937.  About this time the author mentioned that McEwen thought about breaking with the Victorian Country Party over electoral redistribution. Unfortunately no details are provided.

McKenzie says the Country Party in Canberra was in disarray when McEwen arrived. He handled the position as Minister for Agriculture well. One of his achievements is how he worked so closely with Menzies, the Prime Minister from 1949 to 1966. This partnership outlasted both men, but, as the author points out, it helped the Coalition stay in office for 50 out of 75 years since the end of World War Two.

In the chapter “Patriot”, McKenzie highlights some of John McEwen’s characteristics: “For McEwen it was always Australia first”. For example, he got the tariffs on Australian goods lowered when he visited the United Kingdom. His concern about the protection of New Caledonia from a possible Japanese attack was important, but hardly worth eight pages in view of the USA’s victories in the Battle of Midway and the Coral Sea Battle against Japan’s Navy and the victory of Australian troops over Japanese forces in New Guinea.

From his early days McEwen realised the power of the press and he established a close relationship with Rupert Murdoch. Several people, who were interviewed by the author, mentioned McEwen’s great memory, his  diligence and work ethic. He saw the need to have a chain of succession for when he retired from politics. He groomed Doug Anthony, Ian Sinclair, Peter Nixon and Ralph Hunt as possible successors. When McEwen retired, Anthony led the party for 13 years and after that Sinclair led it for a further 5 plus years. This was great vision on McEwen’s part.

Prime Minister Harold Holt drowned in 1967. McKenzie covers the events which followed in great detail. The Liberal Party, because of Holt’s unexpected death, understandably did not have a chain of succession.  McMahon was deputy leader of the party, John Gorton was leader in the Senate and Paul Hasluck was a senior minister. Should McEwen become leader permanently or temporally until the Liberals chose their leader? Should the Liberals choose a leader straight away who could take over as prime minister immediately?

McEwen and McMahon disliked each other intensely. They were different in so many ways and also differed on policy issues. McEwen believed that McMahon constantly leaked cabinet debates and issues. McEwen told the Governor-General, Lord Casey, that if McMahon were to be chosen as prime minister, the Country Party would break away from the Coalition with the Liberal Party. Discussions went on at length.  McKenzie writes that “… these events lay bare McEwen’s ambition and ruthlessness.” While McEwen played a major part in preventing McMahon becoming leader, others also stopped him. Ian Hancock’s book, Ainsley Gotto, points out that Liberal members, such as Allen Fairhall (Minister for Defence) and Dudley Erwin (Chief Whip), delayed a meeting of the Liberal Party until an alternative to McMahon could be found. They were successful

McEwen was Acting Prime Minister for 23 days until the Liberals chose their leader, John Gorton, who left the Senate, replaced McEwen as prime minister and won Higgins (Holt’s seat) in the House of Representatives.

Possibly McEwen could have stayed longer as PM, but he declined to leave the Country Party and the Liberals wanted a PM who was from their own party. Although he was prime minister for only a few weeks, McEwen met several world leaders including President L.B. Johnson, when they attended Holt’s  memorial service.

It is obvious that the author can find few if any faults in anything McEwen did. In Appendix One, she asks nine former National Party leaders to give their opinions of McEwen. All of them give glowing accounts, although only two worked with him.  The other seven had second-hand knowledge. From what these people write, McEwen appears to have had virtually no faults.  She defends John McEwen against commentators and economists who “have long attempted to minimise McEwen’s legacy as outdated protectionism”. She says they are wrong: “McEwen was a practitioner not a theorist.”

In conclusion, this book is a good account of a man about whom many Australians would know very little. Some readers will want to know of McEwen’s achievements in greater detail. The book will certainly encourage these readers to seek out more information about both McEwen’s strengths and weaknesses.