TODAY’S LIBERALISM – HOW TO WALK WITH MENZIES IN MIND

TODAY’S LIBERALISM – HOW TO WALK WITH MENZIES IN MIND 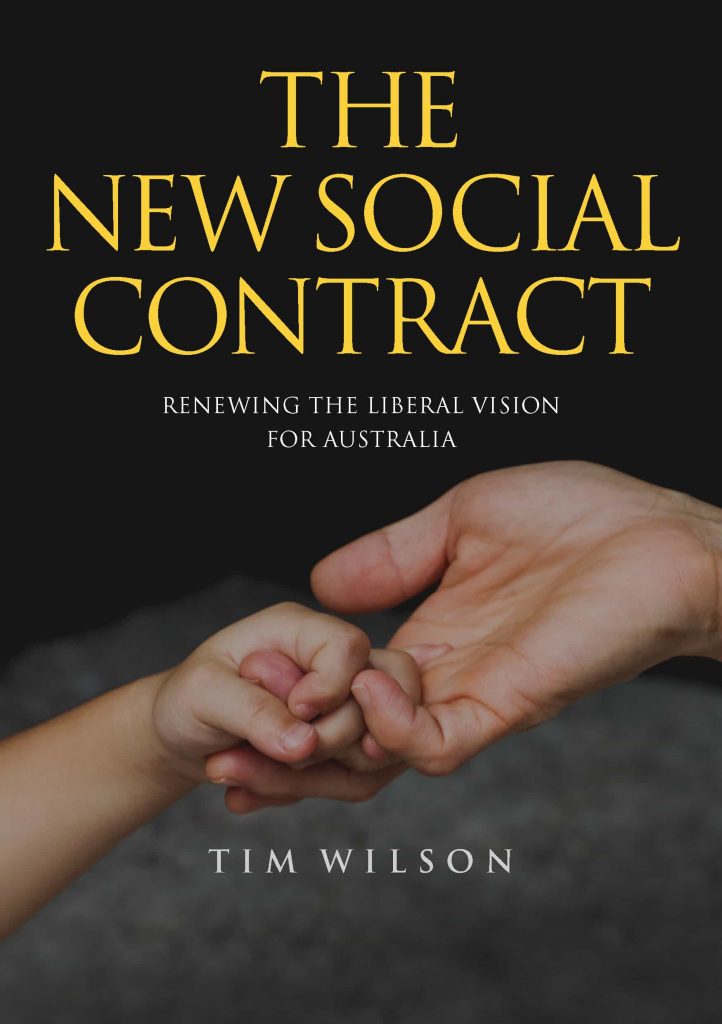 The New Social Contract – Renewing the liberal vision for Australia

This book is a very good read. It covers both aspects of liberalism and compares it with other forms of government. It is a very detailed and well argued account. It covers a topic which is not much written about in recent times. In addition, the author gives a very precise and well-expressed analysis of Australian society today, where we have come from and what might be ahead. The book is packed with material.

The author, Tim Wilson, is a member of the Liberal Party in the House of Representatives for the Victorian seat of Goldstein. He won the seat in 2016 and held it in 2019.  In the 2019 campaign, he played a prominent part in highlighting the flaws in the ALP’s suggestion to change refundable franking credits. He has a bright future in politics.

There are many good features about this book.  Firstly, his topic “The New Social Policy” is one which is not understood by many people. However, Wilson notes that David Kemp, a minister in the Howard Government, has written extensively on this area of interest.

Wilson is arguing that liberals in Australia must change to a new social contract.  The author is very careful to explain what the book is about as it covers many areas. Also he explains how he has divided the book into four sections. While the chapters on the theory of liberalism are very detailed, the chapters on putting this into practice were easier to read and comprehend.

One small comment is that some of the concepts in the book are complex.  The author does discuss them, but a short glossary at the front of the book to explain terms like “liberalism”, “neo-liberalism”, “social contract”, “conservatism’’, “populism” and “equity extraction” would have been helpful. Likewise, the author quotes from a number of philosophers. A brief appendix would have helped. Brief notes about Burke, Mill, Keynes, Malthus, Rousseau, de Tocqueville and others would have made them more accessible to readers who have not studied their work.

Overall, however, Wilson gives a very thorough explanation of the theory of liberalism and how this works in practice Australian society in particular and in other countries as well. The New Social Contract is a scholarly account of current trends and debates.

Tim Wilson explains the difference between liberalism and conservatism and he notes that many liberals have become complacent. The book is full of interesting ideas and comments. Wilson argues that people in Australia under the age of 40 have had a pretty easy life to date. He notes rapid development in China, contrasted with “democratic inertia” in parts of the Western world which he thinks should be addressed There are a numerous comments like the above in page after page. I found myself reading some paragraphs more than once to ensure I had not missed something.

Although Wilson says there are flaws in liberalism, he is a strong defender of it, saying it is “… the most unique of all political ideologies”. It also gives people the empowerment to choose and take responsibility.

Wilson is a great supporter of decentralisation. He sees federation in Australia as crucial as it allows the sharing of power between the Commonwealth and the States. The Constitution, which came into effect in 1901, protects federalism and thereby supports the concept of liberalism. While centralism is efficient, smaller governments help people to exercise power and feel involved. “The vast majority of most people’s lives are local,” he writes.

Wilson sees a unitary system of government as a bad idea. He gives plenty of instances of how liberalism has been in evidence in Australia. He cites many examples such as the distribution of land to the early settlers, the Eureka uprising, the eight-hour day, empowering women to vote and stand for parliament, same-sex marriage legislation.

In what is a relatively small book, Tim Wilson devotes a number of pages to the role of Robert Menzies and liberalism, arguing: “Sir Robert Menzies’ unification of civil society organisations and political movements committed the liberal ideals that formed the Liberal Party of Australia”. He goes on to say, “ It is difficult to understate the significance of what Menzies and others created.”

A very interesting section of Wilson’s book deals with voting patterns, especially in Australia. Once it was that many voters saw the challenge in the community as a contest between capital and labour. Wilson argues that, today, the contest is between the “inners” versus the “outers”, depending on which suburb you live in. Another division is between larger urban areas and small towns and rural Australians. He refers to the division in England between London and non-London.

Voting patterns can change as people get older and as their priorities and interests change. Events such as wars or disasters or depressions can affect voter behaviour.

Wilson queries how liberalism will fit into voting trends and behaviour, such as apathy when it comes to voting? Do such people feel disenfranchised? Wilson stresses that people want equality of opportunity and security. All of these issues makes the reader think.

In several places in his book, Wilson comes back to the pros and cons of decentralisation. On several occasions, he also discusses home ownership, especially as more people see this as unattainable. Menzies saw home ownership as the foundation of “little capitalists”. How is all of this a part of liberalism?

It was good to see how in the last chapter Wilson was able to bring together some of the main issues. These are the need to empower individuals and discourage and decentralise power, such as the need to prioritise home ownership and the need for an intergenerational tax system and to simplify the tax system and get rid of stamp duty. The current pandemic crisis will raise other issues in the years to come.

In conclusion, below are two comments from the author, which will get people thinking.

“It is time for Liberals to offer Australia a new social contract that places the individual at the core of the government’s policy?”

“A new generation of Australians are walking away from the liberal promise in a way that was unthinkable before the fall of the Berlin Wall.”