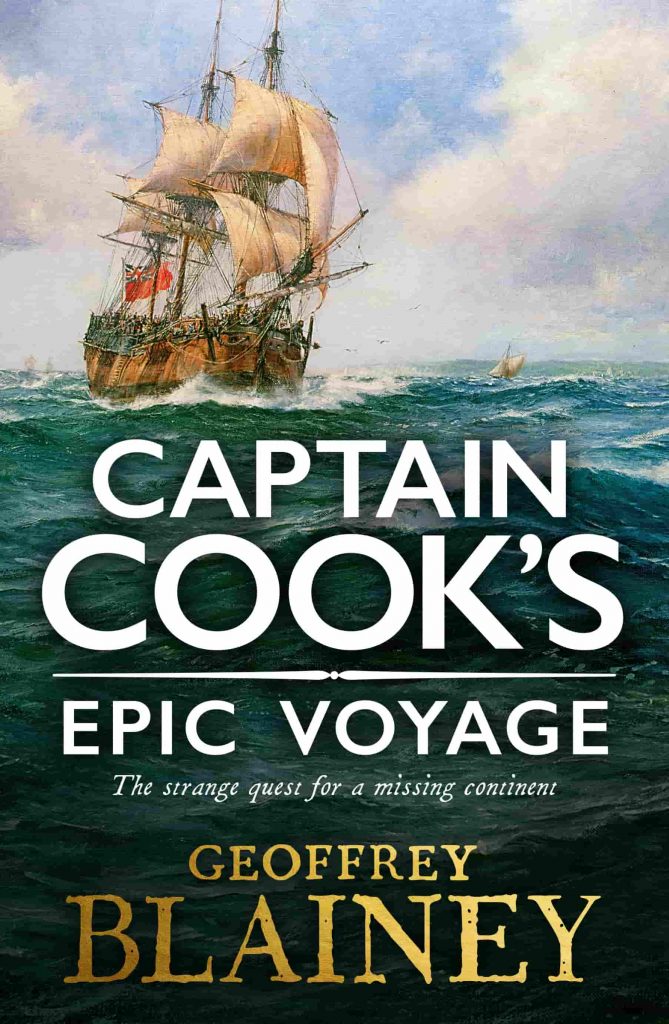 Looking back and looking back with the perspective of time is no bad thing. But looking back on events and people and recasting them out of ignorance and with ideological blinkers is harmful. The year 2020, our year of COVID-19, not only produced a global pandemic, it also unleashed a throwback of protest at leaders of the past – from capitalists who enjoyed the profits of slavery to icons of eighteenth and nineteenth century European expansion across the globe in the age of industrial advances and the curiosity of cartographers.

During Australia 2020, demonstrators splashed paint on the statue of iconic James Cook, the English navigator who, in 1770, first mapped the east coast of the continent that came to be named Australia – from Point Hicks in the south to Cape York in the north.

In Geoffrey Blainey’s reissued and revised James Cook’s Epic Voyage, the heroic tales of Lieutenant Cook, his on board botanists Banks and Solander and the more than 100 crew, aged 12 to 80, who made the voyage possible are retold in lucid and authentic detail – the book should be compulsory reading for all those who have splashed, or contemplate splashing, paint on any James Cook statue.

James Cook, born in 1728, was the son of a farm worker and had the advantage of some formal schooling in his early years. He rose to his naval career via apprenticeship work, from the age of 18, for “John Walker, a wealthy Quaker who owned ships and was busy in the coal trade”. Widely travelled across the North and Baltic seas, Cook next joined the Royal Navy aged 26. He became an accomplished seaman during the (yet another) war between England and France, in charge of the Pembroke and defending English interests along the St Lawrence in Canada.

As with so many of history’s heroes, time and place are everything alongside human talent and endurance. Blainey is a master of capturing the context of his historical characters. Cook’s ability to navigate and his interest in charting his course (unusually rare in many naval captains of his day) brought him to the interest of his masters. In 1766, Cook’s observations of an eclipse of the sun, using instruments including a brass telescopic quadrant, were published and gained Royal Society approval. Blainey captures this raw and emerging talent in a few paragraphs:

Cook was becoming an astronomer… his ship now bobbing about the Atlantic, [he] would have loved to hear the applause and the murmurs of approval at that meeting in London. He could not yet imagine that one day he would be master of observations made at sea.

A sizable financial donation of £4000 from the young King George III made possible the voyage entrusted to James Cook, to observe from Tahiti the transit of Venus of the sun expected on 3 June 1769. Ironically, given Cook’s early years at sea on coal carriers, The Endeavour – Cook’s ship for this scientific voyage – was a converted coal carrier, chosen for its sturdy and safe characteristics such as being able to cross shallow water and not being heavily rigged.

Blainey’s James Cook’s Epic Voyage is a feast of olde world adventure. Unlike Peter FitzSimons, Australia’s most populist historical raconteur, Blainey needs no hyperbole, reinvention of fact or spiced up scenes alongside imaginative remodelling. Blainey stays with the details as kept in log books, journals and accounts of the times. His mastery in retelling valid historical record takes his reader along, never sacrificing historical accuracy.

In 1768, setting off for more than a year or so at sea under sail, to known and unknown parts of the globe, a ship of over 100 seamen needed provisions aplenty. There would be ports to replenish and no ports at all. The deck of The Endeavour was a floating menagerie of caged animals to be slaughtered and eaten along the way, as well as cats to kill mice and even Joseph Banks’ pet greyhounds. Supplies such as biscuits and salted meat came by the ton; the mess deck seated 60. The ship was just 106 feet in length – not even classified a ship at all, just known as a “bark”. Blainey paints the scene minutely:

…at night the hammocks or swinging cots, hung from the ceiling, occupied much of the space. For the ordinary seaman the hammock was only 14 inches, or 36 centimetres, wide. He was so cocooned in his cramped hammock that the ship could roll from side to side without him falling out. … The hammock served another purpose: if a sailor died, he was wrapped in it for burial at sea.

In recent years, arguments about “discovery” of global sites have proliferated. Discovery as a word has taken on a variety of meanings – from seeing a place for the first time to making that place a subject of global interest. Blainey tackles the debate head on:

The controversy – did the Chinese or Portuguese, Dutch or British really discover Australia? – partly centres on the scarcity of facts. It is also a dispute about the meaning of one word: “discovery”. That magical word carries too many meanings. The dispute therefore is likely to continue. A discoverer is not simply the first navigator to see a land and then sail away. A discoverer has to recognise the significance of what he sees, and indirectly persuade others to recognise it. … In navigation, credit usually goes to those discoverers – they might be second or third in line of discovery – who investigate further. In the end they act on the basis of what they see and change the course of history.

Discovery, whatever the accepted meaning, is always a close run thing. Blainey records the route taken by the French captain of the St Jean-Baptiste, Jean de Surville, who was sailing east around the time Cook entered the waters off New Zealand and was sailing west. At times Cook and de Surville were within a few hundred miles of each other. De Surville had also travelled along the eastern Australian coast and not seen it. How different Australian history might have been but for each captain’s interests or decisions.

It is telling to look back on how James Cook became the voyager who discovered the long line of coast of what had been imagined as a great southern continent. Cook was given instructions only to be opened after he had concluded the observations in Tahiti.

Contrary to the protests of today’s critics of Cook and the British Empire, these instructions were not about conquest. Cook was bidden to make a voyage of discovery of “the Beasts and Fowls that inhabit or frequent” whichever land masses he found. In keeping with these instructions, and since it was a scientific voyage, on board The Endeavour were two men who were to make a great impact on the results of Cook’s epic journey – botanists Dr Daniel Solander and Sir Joseph Banks. They also helped contribute to the success of the voyage in preventing the worst outbreaks of scurvy – at the time, responsible for more naval deaths at sea than war.

Apart from the order to seek new information, Cook was instructed to try to make friends with any native inhabitants he encountered. He might claim for King George “a harbour here, a strait there” but he was also instructed not to make claims without the consent of any local inhabitants he encountered. That Cook did make some claims to land, Blainey argues, probably was against “those of Holland, Spain and other naval powers”.

Keeping an historical sense of perspective, Blainey points out that at the time Cook was sailing along the Australian coast, France was three times the population of Britain while England had only two ports south of the equator. It would be another century before England ruled the waves – so to speak.

That Cook and The Endeavour made it back to England, as they did from this voyage, was the result of good luck, muscle power in times of bad luck and a series of calculations on the part of a captain described by one of Cook’s younger contemporaries as a man made up of “audacity and caution”. Blainey concludes that Cook’s success in navigation was due to his knowing when “to apply the caution and when to apply the audacity”.

Yet this did not guarantee safety for The Endeavour as it collided with the world’s greatest coral reef just outside what today is known as Cooktown. That the occupants of The Endeavour both survived and continued their voyage after that collision says much for the grit and ingenuity of the men who saved the day. When all seemed lost, Banks gathered his most precious specimens thinking what many others also at the time realised that to make it to shore might be worse than drowning.

The ship was eventually prised off the reef by sheer human muscle and careful calculations of the tides, its gaping and gouged timbers stopped up with a temporary plug made of cloth, dung and other unseemly material. Later, a huge piece of coral was found to have helped stop even more water surging into the base of the ship. The Endeavour was then repaired over weeks on a riverbank located nearby. Of the work that ensued, Blainey writes:

This riverbank was the first place in Australia that could be called an industrial site. Here rose a shipbuilding yard, along with a timber workshop and blacksmith’s forge. Melted iron was converted into nails, of which thousands and thousands were needed for repairs. Sailmakers were active, their work spread out in front of them. The carpenters were soon at work replacing damaged timbers … The task of heeling was no sooner accomplished than more damage was found on the other side… And yet in the space of a few weeks almost all was in readiness for The Endeavour to return to the ocean.

Geoffrey Blainey brings The Endeavour and its voyage around the globe in 1768-71 to life in ways no movie could achieve. The vertical mountains of waves at the Horn, the unexpected still of calm waters seizing the ship’s passage, moonlight on the water betraying a captain, the smell of land desperately longed for, hunger replenished by the flesh of a monster, freshly cooked stingray, a feast of fish or roasted Bustard, the excitement of seeing a strange new animal that leaped rather than ran and poked its narrow head above spikey grasslands, the fresh greens that saved men from scurvy.

There were deaths and a risk averse way of life, along with the acceptance of the untold privations of life at sea. There were also strange reactions from the Indigenous Australians who watched and ignored the strangers, showing no signs of envy or discontent and who seemed to wish the strangers would simply go away. Blainey’s modern observation is also pertinent – that the diet of Indigenous Aborigines contained a greater variety of seeds, nuts and fruits than that of a typical English or Irish person.

In Australia, there can be no diminishing the contribution of James Cook to the nation’s discovery and development from 1788. Blainey’s argument is that Cook should also be given the gold for his contribution to the cartography and European occupation of New Zealand. He describes Cook as New Zealand’s cartographic conquerer who “saw every prominent cape, discovered that there were two main islands and fixed their position on the map with impressive accuracy”.

In this reissue of Geoffrey Blainey’s James Cook’s Epic Voyage, we should be reminded not only of this extraordinary feat of discovery and endurance but also that humankind makes progress not by ideological construct but by the efforts of those who seek knowledge and are able to follow its paths.