ROBERT MENZIES AT THE MICROPHONE

ROBERT MENZIES AT THE MICROPHONE 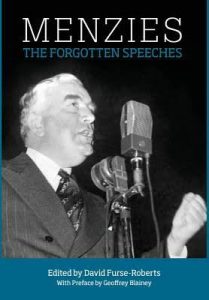 This book is about many of the forgotten speeches and broadcasts produced  by Australia’s longest serving prime minister, Robert Menzies. Before they were recently published, they have been preserved in the basement of the National Library in Canberra.

Sir Robert Menzies was the longest serving Australian Prime Minister and the longest leader of the Liberal Party, which he founded in the mid-1940s. He is one of Australia’s best known Federal politicians. Some public leaders are remembered for their speeches, such as Winston Churchill, Martin Luther King, Abraham Lincoln and Nelson Mandela. Menzies is noted in Australia also for what he said as well as what he wrote, but much of it was never published until recently. Fifty-one such speeches are in this book, in which Menzies covered in a range of diverse topics.

The editor, David Furse-Roberts says that he has a “fascination” for Menzies from his early years as a young man. Sometimes, he almost seems to have gone overboard when he writes about his hero.

In the Preface, Geoffrey Blainey comments that Menzies switched the nation’s focus from Europe towards Asia. To some extent this is accurate, but John Curtin brought the troops back to Australia and set up a close relationship with the USA for the rest of the war and beyond. It is true that Menzies for many years retained a close focus with Britain. He visited the UK for many long visits, he had a reverence towards the monarchy in general and he wanted the new Australian coin to be called the “royal”. In a 1951 speech he refers to the “Britishness of Australians” (page 160). There is not much “turning to Asia” in all of the above.

As early as the 1930s, Menzies was writing and talking about the importance of democracy and other matters.  He also believed that the object of speaking was to move and persuade people. In the chapter dealing with “Freedom and Democracy” while parts of it are interesting, some readers would find it hard to follow what Menzies is saying. The comments made by the editor sometimes don’t help the situation.

From his early public years, it was obvious that Menzies was a centralist. While he recognised the importance of state and local governments, there were areas such as education, which he thought would be better controlled and funded by the Commonwealth.  He believed that while there were some matters the Commonwealth should have an important role in, he also recognising that the High Court could limit those powers by means of the Constitution. While being a centralist, Menzies was in favour of supplying the states with properly funded resources.

Other interesting parts of this collection of speeches are those which relate to politics, parliament and government. Menzies was a strong supporter of the growth of liberalism, which he wanted to flourish. He saw liberalism stood on one side and communism and fascism opposed to it on the other. He strongly supported the role of women in organisations nationwide.

In his 1940 speeches, Menzies says there will be a huge number of changes when the Liberals take over government. These cover a whole range of issues. However, as it turned out, they would not come into effect until 1949. Many of the promises may not have been put into practice for a very long time, if at all.

His Freedom and Democracy speeches straddle the 1930s and the 1940s and make for interesting reading. “Democracy” he sees is where the government is made up “of people who have been freely chosen”. Again, some of the material is convoluting, and it may take the reader a long time to get to the point Menzies is making.

In the chapter “Politics, Parliament and Government”, Menzies shows his real hatred of Communism. Once more, some of his speeches were rambling, especially the one he gave at the Camberwell Town Hall on 23 July 1943.  Furse-Roberts covers a wide range of topics in the period 1943 to 1975.

Menzies also gave speeches to overseas groups. In 1941 he gave a brief broadcast to people in the USA. Many years later, he talked about trade with Japan and the need to patch up earlier events with that country following World War II. He was the first Prime Minister to visit Indonesia, discussing the Colombo Plan and he kept close contact with the UK, despite its entry into the European Economic Community. He discussed the Cold War between the USA and the USSR. He welcomed immigrants to Australia. He saw the importance of all of the above.

Throughout his long public career Menzies was obsessed with education, especially universities. He supported them in whatever way he could. He saw universities as an investment and he encouraged research. Likewise he stressed the importance of social welfare especially after World War II. He also supported the need for a contributory scheme for people in need of help.

Most of the speeches in the second part of the book are interesting. Menzies spoke about the separation of powers, the impartiality of the judiciary, the reasons for Australia not to have a Bill of Rights and the reasons to retain the common law. In a 1946 speech, he carefully explains how Christianity is different from Communism. He shows why he liked the Jewish community. In all of these issues Menzies was concise, interesting and to the point. In other places, such as his speeches on both the status and the role of women and the correct importance of the use of language, he was verbose and long-winded.

It was very interesting to look at some of the speeches Menzies gave after he had left Parliament and was in retirement. It was noticeable that he did not agree from some of the changes that had occurred when Gough Whitlam became Prime Minister. He also was against some of the changes made in the Liberal Party.

He very strongly opposed to Australia becoming a Republic. He disliked the Labor Treasurer’s economic policies. He was against Australia recognising Mainland China. In particular, he was worried by what he perceived as the growth of Communism. He disliked the “modern media”. This was a very interesting section of the book, as Menzies comes across as being very conservative.

Menzies: The Forgotten Speeches is a good read and the newly discovered speeches are a great addition. The reader learns a considerable deal about Robert Menzies. Even though the speeches were “lost” for some time, the editor has gone to a great deal of trouble to publish, group and edit them.