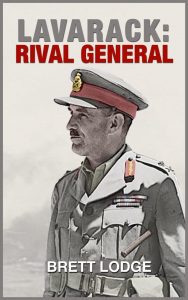 He held a distinguished military record in World War I and rose in the ranks, taking time after the war to remain in Britain with the Australian Imperial Force. When John Lavarack (1885-1957) returned to Australia in September 1919, he had been away from Australia for seven years. In 1920, he was second in command at Duntroon, Canberra. After a course at the Imperial Defence College in London in 1928, he moved up the ranks to be appointed Director of Military Operations and Intelligence at Army Headquarters in Melbourne. In 1935, he became Chief of the General Staff (CGS).

It looked, from any vantage point, like John Lavarack was destined for the highest military position in Australia’s Army. But it was not to be. And Brett Lodge’s fine biography of Lavarack – now reissued to take in further documents made available since the 1998 edition of the book – leaves no doubt of what forces cruelled Lavarack’s career.

The story of John Lavarack is the story of more than a military career. It is also an analysis of the age old outcomes of rivalry, professional competition and the politics of the workplace, which in this case involved decisions made as high up as Australia’s political leadership. John Lavarack would pay the price of clashing, both in personality and military opinion, with his immediate superior on numerous postings, namely Australia’s Army senior officer Thomas Blamey, as well as being out of step with established views on defence strategy in the 1930s.

Brett Lodge is careful not to make his work a vilification of Thomas Blamey and writes of the two men as well grounded in their profession. The tension between them is explored from the observations of others and the deliberate moves made in Lavarack’s postings during World War II which certainly undermined his progression.

In this intensely researched account of Lavarack and Blamey, Brett references the view of Captain John Rogers who corresponded with David Horner for his Blamey – The Commander-in-Chief . From their earliest days of working together on the Western front in 1917, it is evident that they clashed and Brett writes:

Lavarack and Blamey worked together in the 1st Division for seven months, and it is all but certain that this period saw the beginnings of the “feud”, as one staff officer put it, between the two men. At the least, their time serving together would have provided opportunity enough to establish that, although both were able and professional, they were essentially different in character and so the chance of any deep rapport developing between them was remote.

The picture drawn of Lavarack’s personality is one of confidence in his abilities, a sense of duty at all times and a man of defined opinions. In 1933, as Commandant of the Royal Military College in Duntroon, Canberra, Lavarack published an article in the British Army Quarterly contesting the view expressed by former commander-in-chief of the East Indies Squadron Admiral, Sir Herbert Richmond, in the same journal. The article was entitled “The Defence of the British Empire, with Special Reference to the Far East and Australia”.

In his article, Lavarack argued strongly against Admiral Richmond’s view that British ships could defend British interests in the Pacific or Indian Ocean while stationed in the Atlantic and Mediterranean. In other words, relying on the yet-to-be-built British base in Singapore was extremely unreliable for Australia’s defence. Lavarack would go on to argue, throughout the 1930s, for a large, mobile, Australian land-based force to offset the weakened British command of the seas. He was not alone in his thinking – a number of senior army officers agreed with him.

At a time of severe economic downturn alongside competition among the forces – army, navy and air – for government resources, Lavarack’s arguments for a mobile and strong land force largely fell on deaf ears. It was seen as a push against Britain’s Singapore strategy and could also be misconstrued as simply a plea for more resources for the army. Admiral Richmond himself returned fire, after Lavarack’s article, arguing that Lavarack was “labouring under a particularist influence very common today – that of the doctrine of national self-sufficiency”. After World War II, Richmond would accept that he had been wrong on the Singapore strategy.

All too late for Lavarack who had quickly made himself a thorn in the side of a prevailing orthodoxy. This would deepen after the visit to Australia of Sir Maurice Hankey – Secretary of the Committee of Imperial Defence – in late 1934. The Australian forces managed to paper over their differences during the visit leaving Hankey to support a continuation of the Singapore strategy. In the wake of the visit, however, Lavarack took exception to Hankey’s report. Lodge writes:

Lavarack would question the whole basis of existing defence policy, and in so doing, openly challenge the views and abilities of serving officers, civil servants and politicians in both Australia and Britain.

In assessing the criticisms of the Hankey report in 1935, by outgoing Chief of the General Staff Major-General Sir Julius Bruche and incoming CGS Lavarack, Lodge reveals a taste of defence realities to come, as well as some prescient thinking on the part of those army officers. While their assessments were fixed on the notion Australia would face an invasion, which never actually occurred, Bruche and Lavarack were spot on regarding the weaknesses of the Singapore strategy. Ironically, while they were making their arguments in Australia against the report’s conclusions, senior members of the British Government in London were confidentially conceding that Britain did not have sufficient naval forces to equip a “two-front war to protect the Indian and Pacific Oceans”. In opposing the Hankey report, Lavarack had made a dogged opponent of a Hankey soul mate – Frederick Shedden, who would become Secretary of the Department of Defence in 1937.

With Australia’s military forces in the Middle East, North Africa and the Mediterranean from 1940, Lavarack and Blamey once more found themselves in command and at odds. In the defence of Tobruk in April 1941, where the Australians and British forces gave Rommel’s troops a hiding, Lodge forensically examines the tension in the Australian high command and concludes:

Although Lavarack was not as much the commander fighting the battle in Tobruk as Moreshead, he was nevertheless the overall commander and it had been his plan and orders which dictated how the defence would be conducted. His determination to ignore the gratuitous advice from Blamey, and others, and to base the defence on the outer perimeter had been thoroughly vindicated.

In spite of this stunning success, Lavarack was not rewarded with command in Egypt as he expected, but with his replacement there by a British commander. Digging through the document trail, Lodge reveals not just what Blamey called “the repugnance of the British Command to accept Dominion officers however successful in higher command” but decisions alongside that by Blamey himself to move Lavarack out of the main war. Even in spite of Blamey’s own deficiencies in the failed Greek campaign. As Lodge writes:

Blamey was at least as much a politician as a general [and] … often directed his political energies to affairs within the army, with the result that several senior officers’ careers were to be crippled during the war while others, who were less able, flourished because they were Blamey’s favourites.

Sidelined and moved to 7th Australian Division, Lavarack excelled as commander in the Syria-Lebanon campaign against the Vichy French. Even there, Lodge shows how Blamey attempted to ghost reports of the Australian successes. In spite of Lavarack achieving command of several British units – something Blamey had admonished the British for, claiming they generally denied this to the Australian command.

Lodge’s analysis and detail of Lavarack’s leadership in Syria lays bare the way he was ghosted during the war years by Blamey. More so, when Lavarack returned to the South East Asian theatre he found little favour with Prime Minister John Curtin over his support for British commander Archibald Wavell’s Burma campaign and his suggestion that Curtin move the 7th Division there. Curtin, ever the home defence leader and in defiance, requested all three Australian divisions return to Australia.

With chapters titled “There is no Generosity in Blamey” and “He has not had a Good War”, Lodge traces how Blamey kept Lavarack in military mothballs for the rest of the war years. Wasted talent, Lavarack was kept away from the New Guinea and Pacific campaigns, languishing in Queensland’s Toowoomba as head of the diminishing First Army and then sent to Washington with Curtin’s proviso “that there was no implication in these moves of further advancement”. In careful analysis of what is now significant documentary evidence, Lodge makes it clear that Lavarack had been comprehensively undermined behind the scenes as to his character and abilities. And this largely due to the intervention of his senior officer Thomas Blamey.

In time, Lavarack would become a popular governor of Queensland and accept his fate. His time as a war commander in Queensland is honoured by the Lavarack Barracks in Townsville.

Brett Lodge in this moving and keenly researched biography has redeemed a fine soldier, outing those who sought to undermine his career, an outstanding military figure who, despite failing to win over a wartime prime minister and being touted by his rivals as a man with a difficult temperament, remained disciplined and loyal to his profession to the end.