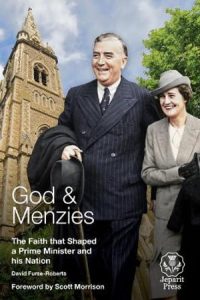 Many authors, who have written about a person, deal with the person’s achievements, failures, successes, acquaintances, experiences, etc. But often the reader does not learn much about the inner person. This book is quite different. While the author of the book does not discuss all of the above in detail, it goes far deeper than most biographies. The author does not discuss in detail the strengths and weaknesses of Menzies. However, the reader does get to understand a great deal about Menzies the person, and his beliefs, views and religious convictions.

Furse-Roberts pays much attention to Menzies’ early life, as these years were crucial in explaining how he turned out the way he did. His father was a preacher. Like many people of Robert Menzies’ generation, he lived in a religious environment where church attendance was important and most houses had a copy of the Bible.

Menzies attended the local state school in Jeparit, Victoria and later the Humphrey Street state school in Ballarat. In his final year he won a scholarship to attend Ballarat’s private secondary school Grenville College. From there, he won a scholarship to attend Wesley College in Melbourne, going on to Melbourne University, where he became fully involved in a number of activities and events.

The chapter of the book on religion is also extremely interesting in a number of ways. It gives the reader a very detailed account of the church leaders at the time, what the differences between the churches were and what separated the different churches in what they believed. It also deals with the ideas of some of the most well-known philosophers. Menzies would have thrived in this environment. Later on, he became one of the few prime ministers who paid attention to many religious affairs. Furse-Roberts notes that some of the more recent biographers on Menzies have paid more attention to his interests on these issues.

Menzies was at Melbourne University for most of World War I, and therefore he saw at first hand the sectarian issues that occurred in these years between Catholics and Protestants over the war in general and much worse divisions over the question of conscription. He was deeply moved by what he saw. Looking back on these events much later Menzies was to write that “… sectarianism nauseated me…”

Years after World War I, Menzies was to do whatever he could to bring the different religious groups closer. He had regular discussions and meetings with the religious hierarchy of the various churches. He attended school functions, prize nights and so on to show his interest in what the church schools were doing. He did the same for government schools. He rarely got involved in arguments and debates about the government/religious school divide.

Furse-Roberts stresses that Menzies after World War I continued with the things that interested him, such as Christianity, liberalism and democracy. However, he also became involved in other matters and events, many of which younger readers will remember. He quoted the parable of the good Samaritan as an example of support for countries in the Asian-Pacific area. He stressed that more attention must be paid to the “forgotten people” in Australia.

After 1945 Menzies became more concerned about Communism, which he saw in Australia as “godless”. He thought that maybe Communism could annihilate religion.  Menzies, like so many people at that time, was concerned about the influence of Communism in the trade unions. He introduced the Communist Party Dissolution Bill in the House of Representatives as a way of getting rid of the party by means of a referendum. This was narrowly defeated.

In addition, Menzies quickly supported Australian’s involvement in both the Korean and Vietnam Wars against the Communists. To sum up, Menzies said: “…There can be no compromise between Christ and the anti-Christ.”

Menzies was also interested in education matters in Australia. He noted that without government support many schools could fall behind. As a result, over a period of years he put in place a number of innovations. These included a tax deduction to help parents to pay for school uniforms and, in addition, from 1964 all schools were given library and science buildings paid for by the governments. Later, financial state aid was given to all school children. Commonwealth scholarships were introduced.

Menzies’ energy seemed boundless. When it was brought to his attention that there were very few Catholics politicians in the Liberal Party in Canberra, this was quickly changed. Some thought, incorrectly, that he was chasing the Catholic vote.

He himself took an interest in so many matters. Realising that there was only a small number of Jews in Australia, he got to know many of them who were in high positions, especially in the legal profession. He supported Israel in the Suez Canal crisis and he embraced Australian Jewry. He involved himself in “fireside chats on the radio” as well as Sunday afternoon talks. He supported people who were involved in science as a profession. He had no bounds in what interested him.

In conclusion, readers can only be impressed with Robert Menzies. In the “Afterword” for the book, former National Party leader John Anderson writes, “Menzies was, arguably, Australia’s most important and ‘nation shaping’ Prime Minister.” Readers will also be impressed by Furse-Roberts’ work which is extensively researched.

In God and Menzies no stone has been left unturned. There are, also, a large number of footnotes. In Chapter Seven alone there are 92 footnotes. Having them at the bottom of each page also makes it easier for the reader.