THE FLIPPING OF A COIN – AND THE SEARCH FOR ANSWERS

THE FLIPPING OF A COIN – AND THE SEARCH FOR ANSWERS 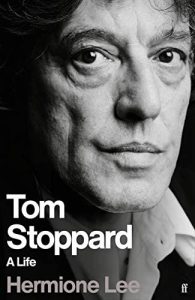 It’s a big book, a bit short of 1000 pages with notes and index taken into account. At times, it seems to offer up compendium qualities as the biographer’s analysis of the many Stoppard’s works are detailed and explored. It is certainly a valuable addition to the library of any scholar researching twentieth and twenty-first century drama. Tom Stoppard chose well in selecting Hermione Lee as his biographer. The finished product is a marvellous portrait of a complex man, his phenomenal output of work and his personal journey. If, at times, the text seems to treat the figures of Stoppard’s emotional life much like the main characters in Hamlet as they briefly appear offstage or barely onstage in Stoppard’s Rosencrantz and Guildenstern Are Dead, this can be excused in a work that seeks to explore the professional life and creations of a great dramatist.

That Stoppard took such a firm hand in having his biography written seems to have been founded in his peak years of dramatic success in the early 1990s when he expressed a fear of having his life exposed after his death – of being “raw material in someone else’s Life”. The many letters he had written – especially to his mother – haunted him, along with words that might be exaggerated and misunderstood by some unknown scholar, words perhaps in a reply to a fan or the polite few lines to a casual acquaintance. “Burn everything,” he told his mother. She didn’t. And Lee has made good use of the many letters he wrote his mother in her Stoppard biography.

It has been Tom Stoppard’s fate to feel the need to reject claims his plays are at all a reflection of his own life experiences, that they are at all biographical. His plays, he has consistently asserted, come from what he thinks, reads and reasons, not from moments he has personally experienced. Ironically, however, his first major success – and some would argue his masterpiece – Rosencrantz and Guildenstern Are Dead – holds within it a key moment that echoes Stoppard’s early destiny – the flipping of a coin.

Born Tomas Straussler in 1937, to Czech parents Marta and Eugen, Tom and his brother Peter (Petr) became refugee children on the other side of the world after the Bata company his doctor father worked for opened up escape routes for its Jewish doctors after the Nazi occupation of the Sudetenland in 1938. A choice of two safe destinations were offered to Dr Gellert and Dr Straussler. One could take Kenya and the other Singapore. By chance, the Strausslers went to Singapore. It would define their future in dark ways. As the Japanese advanced on Singapore, in early 1942, Marta and her boys were evacuated to Columbo. Eugen, however, would perish shortly after on a merchant ship bombed by the Japanese while carrying evacuees headed for Australia. Marta eventually made a life in India’s Darjeeling, managing a shop for Bata while the boys boarded at an American Methodist school. In time, she learned that Eugen had perished – listed missing. In November 1945, she married the very English Major Ken Stoppard without telling her sons in advance.

The marriage and Marta’s determination to be English and forget, if not hide, her Czech Jewish heritage would from then on complicate Tom Stoppard’s view of his world. Only in adulthood would he learn he was Jewish and only after his mother’s death would he feel free to enquire or discuss what had happened to his mother and father’s extended family in Europe after 1938.

After the marriage, the Straussler boys took their step-father’s surname and anglicised their first names. Settled in England after the war, they were sent to boarding school and brought up to be young English gentleman. A reality Stoppard appreciated thereafter with his love of England. Major Stoppard, however, was – in Lee’s words – “a bitter, disappointed man, bigoted, xenophobic and anti-semitic”. Against this backdrop, Stoppard finished his schooling and immediately started working life as a journalist in Bristol – what Lee refers to as Stoppard’s “university”. His fascination with the theatre soon followed.

As Lee charts, chronologically and systematically, Stoppard’s efforts towards life as a dramatist, significant theatrical names dot his path. There is friendship with a young Peter O’Toole in Bristol, working for Peter Cook’s Scene in London from late 1962, meeting Sam Beckett at a party and “being completely in awe” just for starters. His early attempts at plays were unsuccessful but then came Rosencrantz and Guildenstern Are Dead. At first rejected by the Royal Shakespeare Company (RSC) as “incomprehensible and not very funny” and then after further work rejected by the BBC as “long, wordy and rambling”, it was passed on by Trevor Nunn to the Oxford Playhouse director Frank Hauser and found its way to the Oxford Theatre Group.

Staged for the first time in Edinburgh at the Fringe Festival, after Stoppard and the cast worked hard to mould it to an accessible production, the play brought confused responses until Kenneth Tynan called for a copy of the script after reading a rave review by the Observer’s Ronald Bryden who described the play as being “as witty and vaulting as Beckett’s original is despairing”. Stoppard would become “the youngest, and the least-known, writer to have a play put on at the National”. His humble financial circumstances with first wife Jose and small son were over.

Stoppard’s dramatic success came at a time of exciting outpourings from young and talented writers working with equally talented producers and actors in an era that was witnessing a blossoming of film and television opportunities. Yet, among this literary coterie of Marxist, leftist leaning and alienated individuals, Stoppard’s positive attitude to Britain and his pride in being British left him pushing back against accusations of being a reactionary with “anti-Soviet politics”, a dramatist who wrote frivolous plays on trivial subjects. Perhaps this prompted his cultivation of what was often referred to as a charm offensive in his networking and associations. For all that, Stoppard won the support and long standing friendship of activist lefties such as Harold Pinter and David Hare. As Lee writes:

Play after play – Jumpers, The Real Thing, Professional Foul, Every Boy Deserves Favour, Night and Day, The Coast of Utopia, Rock ‘n’ Roll, Leopoldstadt – would return in different changing ways, to questions of morality, ethics, political beliefs and individual liberty. The writer who was accused during his early career of being a frivolous reactionary would become known as a playwright profoundly interested in the political choices and decisions of individuals at particular historical moments. But the label of “conservative” and “right-wing” stayed with him from this time onwards.

Stoppard emerges from this long biography as a genial and intensive personality, addicted to his work and tolerant of criticism and the need to work on both scripts and performances. Team solidarity in rehearsals reveals a leader of the group who not only works closely with his actors but can rework a script again and again. The finished product is organic in the best sense of the word. Rewrites and edits can occur all the way through a play’s season. Film scripts emerge from copious reading of texts and focussed discussions. Actors bring their own personalities to the staging. The happenstance of Stoppard’s many plays, and their debates about reality, are also present in his workshops. Lee writes:

His own self-education was itself an example of what fascinated him, how knowledge is acquired and put to use. He enjoys writing plays in which thinkers make sense of the world, or apply logic and reason to what seems impenetrable. He loves to set up complications that require acrobatic feats of ingenuity to solve.

The Stoppard caravan was a heady broth. The Lee biography is littered with the names of the famous, even stars, in the arts and film world, and the political as Stoppard explored his Czech heritage and befriended Vaclav Havel, supporting writers in the Soviet bloc. Similarly, later, as he came to terms with his Jewish identity. Lee describes a complicated personality in Stoppard – one who did not need, he said, to talk to anybody, while spending most of his life networking, enjoying the company of actors, directors, producers and writers he worked with and came to know.

Keeping in touch was important to him and eventually he devised the “one big, regular event, so as not to feel guilty about the many people he did not see often enough”. These were highlights of the social calendar for those invited. During his two-decade marriage to Miriam Stoppard, they would hold summer marquee parties at their home Iver Grove. He held “English tea parties” at the Grolier Club when in New York. The names Lee lists of attendees read like guests at a Golden Globe night. For years, he hired out the Chelsea Physic Garden every two years. Lee writes:

The total cost for the 2013 party, for instance, on the basis of 650 guests and 150 children, was about £118,000, including the hire of the garden, the food, the staff, the marquee, the entertainers and the wine. One cynical publishing friend thought how he must have been wondering what to do with all his money.

Lee points to a “doubleness” in Stoppard like the two sides of a coin. She quotes from his friend Jack O’Brien who said of him, “He’s a benign pachyderm. He masks himself … He wants to be adored. And he’s good at being adored.” In June 1997, Stoppard became the first playwright knighted since Terence Rattigan. “He was deeply pleased,” writes Lee. It is with Lee’s description of Stoppard’s article for Tina Brown’s 1999 inaugural issue of Talk magazine that something of the complexities of Stoppard’s life is captured. Amid the glitz of articles such as “Gwyneth Goes Bad”, a profile of Hillary Clinton a year after the Monica Lewinsky affair and a few months after her husband’s impeachment, a piece on Mohamed Al Fayed’s theories about his son’s death with Princess Diana and others of similar vein, Tom Stoppard’s “thoughtful and moving piece about his family’s history” made its debut. Lee writes: “That combination of high glamour and reflective inwardness was a feature of his life.”

As Lee peels away layers, Stoppard is seen to develop his plays around many of the issues that confronted not only his generation at the time but also his personal journey. This ended in his great late life work Leopoldstadt.  Based around a fictitious Viennese Jewish family between the years 1899 to the post war years of the 1950s, Stoppard reworks the many questions still asked of the fate not only of his own extended family but that of millions of others.

There is a lot to take in from Hermione Lee’s biography of Tom Stoppard. His achievements and body of work deserve her copious and exacting study. He is not just a “genius” as his actor son Ed describes him. Stoppard emerges from this book as also someone energised by a search for answers. Surprisingly, at the centre of his exploration, he discovers a family secret, his Jewish identity, eventually bringing the personal and universal together.