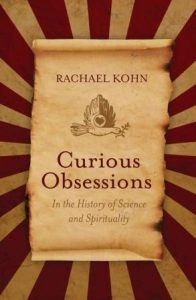 Curious Obsessions in The History of Science and Spirituality

The word “catholic” comes to us from the Greek word katholikos, which means “universal”.  In the Roman Catholic Church, this universality is often jokingly referred to as “here comes everybody”, a reminder that we are indeed a broad church, encompassing the meek and mild, as well as the uncanny and unconventional.

In Curious Obsessions in the History of Science and Spirituality, Rachael Kohn makes clear that the “here comes everybody” experience is not unique to Catholicism, nor even to religious faith. Kohn introduces the reader to an array of quirky and eccentric individuals whose colourful lives and interests have provided colour and movement in the history of science and religion, and sometimes in both.

We meet priest astrologers like Giordano Bruno from the sixteenth century, bound, gagged, imprisoned and ultimately executed as a heretic. Lauded as both hero and villain, some propose that it was Bruno’s cosmological views, such as his claim of an infinite universe, that were the reason for his death and canonise him as a martyr for the truth. Others will say that it was Bruno’s denial of fundamental Catholic doctrines, such as the Real Presence of Jesus in the Eucharist, a rejection of the Trinity and his belief in the reincarnation that drew Rome’s ire. We also meet Athanasius Kircher who, only a generation later, was spared any such punishment even though he repeated Bruno’s assessment of the universe.

Looking towards more recent religious and scientific history, Kohn introduces the reader to the female founders of modern Christian denominations and other beliefs.  There was Mary Baker Eddy, founder of the Christian Science Church, who amassed a not insignificant number of followers with the belief that knowledge of medicine and even basic hygiene practices were harmful to health, and that prayer was the ultimate cure for any ill.

There’s also Ellen White, founder of the Seventh Day Adventists, a prolific writer whose theological writings covered topics ranging from Biblical analysis to the importance of a healthy diet.

Read from start to finish, one would be forgiven for believing that religious folk, including the founders and first adherents of many faiths, are a somewhat peculiar bunch, prone to believing myth and fantasy from anyone who claimed to have insight to God.

For example, the brief mention in the book of St Bernadette Soubirous of Lourdes speaks of the sale of photographs of Bernadette as “a handy little earner” for her religious order since that time but speaks nothing of the hundreds of millions who have visited Lourdes – her birthplace and the location of her visions – following her death, nor the scores of verified miracles that have occurred in Lourdes during that time.

We read of Eileen O’Connor, founder of Our Lady’s Nurses for the Poor, as one who “scandalised polite Sydney society” and came into conflict with Church leadership, but nothing of the order’s existence in the present day, nor the opening of her cause for canonisation and the description of Eileen as Australia’s “saint-in-waiting”.

A reader who explores no further than the tabloid-worthy aspects of these stories would not do this text justice, because they risk being left with the idea that it is those who sit at the margins of the practice of faith or science who have the monopoly on “progress”.

In his Lectures on the Gospel according to St John, St Augustine reminds us that the miracles of Jesus we read about in the Gospels should serve as a prompting to us to marvel at the miracles that occur in the seeming ordinariness of creation:

The miracle indeed of our Lord Jesus Christ, whereby He made the water into wine, is not marvellous to those who know that it was God’s doing. For He who made wine on that day at the marriage feast, , in those six water-pots, which He commanded to be filled with water, the self-same does this every year in vines. For even as that which the servants put into the water-pots was turned into wine by the doing of the Lord, so in like manner also is what the clouds pour forth changed into wine by the doing of the same Lord. But we do not wonder at the latter, because it happens every year: it has lost its marvellousness by its constant recurrence…

God has, as it were, reserved to Himself the doing of certain extraordinary actions, that, by striking them with wonder, He might rouse men as from sleep to worship Him. A dead man has risen again; men marvel: so many are born daily, and none marvels. If we reflect more considerately, it is a matter of greater wonder for one to be who was not before, than for one who was to come to life again.

The miraculous, St Augustine explains, serve their purpose more fully when they awaken us to the wonders that surround us each day.

In a similar way, the fantastic stories in Curious Obsessions do their best work not in the tales that they tell, charming as they are, but in rousing the reader to remember the miracle that is seen in the quiet, everyday commitment of so many people of faith. For millennia across a plurality of religious traditions, priests and other clergy and ministers, nuns, brothers, monks, and laypeople, quietly yet devotedly live out their days in the service of God and others, seeking and speaking truth in the humdrum of “ordinary” life.

They are not venerated as saints, their names neither written in either history books nor in tales of faith’s most memorable characters, but they have been collectively responsible for the true “progress” of religion.

The same is true of those who dedicate their lives to the scientific world; those who likewise have spent their lives trying to solve a particular puzzle, methodically and meticulously, in order to advance humankind and scientific research, even by the smallest of steps.

While the stories of these more mundane folk might not make for entertaining reading, they have often been the true progressives. This is especially true for those who have not seen science and religion as being in conflict, but have pursued both as disciplines which seek and speak the truth.

One of the great myths of the present is that religion always stands in the way of scientific progress.  The truth is that the Church sometimes behaved with shocking indifference to human life and suffering in its efforts to suppress free thought.  But the irony is that some of the most intellectually adventurous minds ever to push forward the frontiers of knowledge were men of the cloth.

Monica Doumit is the Director of Public Affairs and Engagement for the Catholic Archdiocese of Sydney, an Adjunct Senior Lecturer in Law at the University of Notre Dame Australia and a columnist for the Catholic Weekly.